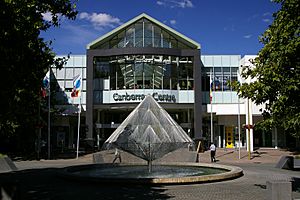 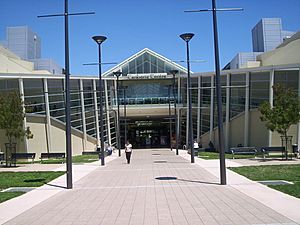 The new front of the Canberra Centre on Ainslie Avenue 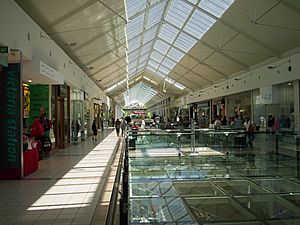 Inside the Canberra Centre

Canberra Centre is a large shopping centre located in the northern section of the Canberra City Centre City Centre, Australian Capital Territory, Australia, being the largest centre within the Australian Capital Territory. It opened on 6 March 1963 as the Monaro Mall, becoming the first in Australia to contain three floors and be fully enclosed, though would later expand to cover a substantial outdoor component on Garema Place. It was designated an Australian Capital Historic Site in 1997. It underwent a $220 million redevelopment and became the Canberra Centre in 1989. It was the first shopping centre in Canberra to have a car park operated by Car Park Ticket Machines. Canberra Centre is currently 207,668 m² in size with over 380 speciality retailers, encompassing an ownership merge with the ACT Government.

Prime Minister Robert Menzies opened the original shopping centre, known as the Monaro Mall, on 6 March 1963. At the time it was the first Australian three-storey, fully enclosed and air conditioned shopping centre. with David Jones, Marcus Clarks, Coles New World Supermarket (now closed), McEwans Hardware (now closed) and 58 speciality shops. The centre was expanded and rebranded as Canberra Centre and was opened officially by Rosemary Follet on 2 November 1989. Canberra Centre originally consisted of 4 city blocks: David Jones, Myer, City Market (a fresh food precinct) and Target. To access either City Market or Target, you had to either exit the main atrium and cross Bunda Street or access via the now-demolished travelators that ran parallel to Ainslie Avenue from the car parks.

At this time, Canberra Centre was owned and managed by Canberra Advance Bank, which later became St George Bank. In 1992 Queensland Investment Corporation expressed interest in purchasing Canberra Centre and put in a 50% stake purchase of the centre. In 1993 the old Bunda Street entrance was aligned diagonally to be on the corner of Petrie Plaza and Bunda Street. Another extension occurred in 1993 of the Upper Floor fashion atrium, where Pumpkin Patch is now (pumpkin patch is no longer there in Canberra Centre). It was not until 2002 when a major expansion occurred, by extending the atrium by crossing over Bunda Street and closing Ainslie Avenue to allow access to City Market and Target without going outdoors. By this time, the original atrium was under refurbishment. The columns were painted in shades of white and dark green, replacing the previous watery-blue and maroon. Balustrades were re-fitted with stainless steel and painted black, replacing the brass and maroon. The Lower Ground Floor replaced all the brass and maroon chairs and tables, with plastic black and white ones. The Centre Court fountain was removed and replaced with a 360 TV. The centre clock, which ran up 3 levels, was removed due to being maroon and brass. All the toilets were refurbished and centre signage was replaced, again due to being brass letters on maroon wood.

On 28 February 2007, a severe thunderstorm known as a "supercell" passed over Canberra causing flash flooding, severe hail and property damage. The Canberra Centre along with the Australian National University and Campbell High School sustained heavy damage with flooding and damage to internal fit out. Severe damage was inflicted on most parts of the centre including the brand new expansion. The first sign of trouble for those inside the centre came when water began pouring from the ceiling of the Dendy Cinema. After ten minutes, staff began a hasty evacuation. Borders (now closed) also sustained heavy damage and flooding.

In July 2017, a renovated section of the Canberra Centre known as Monaro Mall reopened as the Beauty precinct with brands like Jurlique, Lush, Crabtree and Evelyn, Mecca Maxima, Inglot, L'occitane, Aveda .

End of 2018 and 2019 saw new brands like Superdry, Nike, Nothface, Vans, Levi's open stores on the lower level on the mall.

All content from Kiddle encyclopedia articles (including the article images and facts) can be freely used under Attribution-ShareAlike license, unless stated otherwise. Cite this article:
Canberra Centre Facts for Kids. Kiddle Encyclopedia.