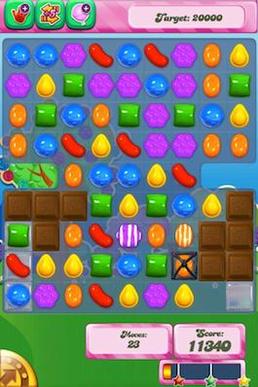 Some players love this game because they can kill time by playing it.

However, some people who hate this game think that it reduces the productivity of society. They are also worried that Candy Crush Saga makes children get addicted very easily.

Metacritic rated Candy Crush Saga as 76 out of 100.

In Hong Kong, a minibus driver played Candy Crush Saga while he was in a traffic jam.

In Taiwan, a bakery provides cakes whose theme is Candy Crush Saga.

All content from Kiddle encyclopedia articles (including the article images and facts) can be freely used under Attribution-ShareAlike license, unless stated otherwise. Cite this article:
Candy Crush Saga Facts for Kids. Kiddle Encyclopedia.