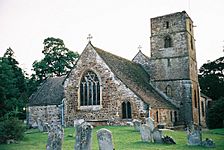 English Heritage have designated it a Grade I listed building.

During late Saxon times, a small cruciform chapel was built, which is now the chancel. During Norman times, the church was much expanded, and the north tower was added circa 1180 in a very unusual place – not far enough to the north to be considered a transept, as at Exeter Cathedral. It contains a ring of six bells, the back five of which are the last ring of bells out of the foundry of William Knight. The treble was added in 1897, to commemorate the Golden Jubilee of Queen Victoria. The back five bells are listed. The tenor weighs 1,088 pounds (494 kg) and strikes the note F♯.

All content from Kiddle encyclopedia articles (including the article images and facts) can be freely used under Attribution-ShareAlike license, unless stated otherwise. Cite this article:
Canford Magna Parish Church Facts for Kids. Kiddle Encyclopedia.