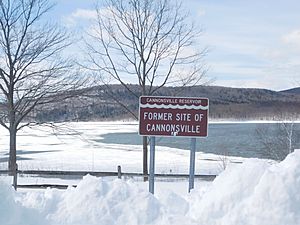 Today the site of Cannonsville is marked by a sign

Cannonsville was a town in Delaware County in Upstate New York. The town was founded in the late 18th century and survived until 1964, when it was flooded to create the Cannonsville Reservoir, which is part of the Delaware System and provides water to New York City. Its site is located in the present-day town of Tompkins. Cannonsville was named after Benjamin Cannon, Sr. He is alternately credited with building the town's first house, and being its first Postmaster.

All content from Kiddle encyclopedia articles (including the article images and facts) can be freely used under Attribution-ShareAlike license, unless stated otherwise. Cite this article:
Cannonsville, New York Facts for Kids. Kiddle Encyclopedia.