Canons of Dort facts for kids 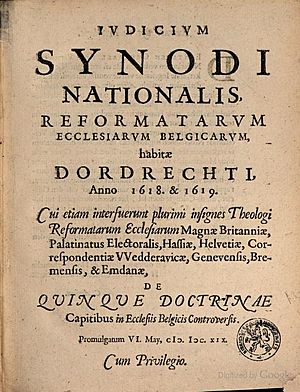 The Canons of Dort, also called the Canons of Dordrecht (full name: The Decision of the Synod of Dort on the Five Main Points of Doctrine in Dispute in the Netherlands) is the ruling of the National Synod (or meeting) that took place in the Dutch city of Dordrecht from 1618-1619. Dordrecht is often called Dort in English.

The Canons are not supposed to be an absolute explanation of the Reformed doctrine, but only explain the five points of doctrine that were being argued over. These Canons introduced the Five Points of Calvinism.

Books on the Canons

All content from Kiddle encyclopedia articles (including the article images and facts) can be freely used under Attribution-ShareAlike license, unless stated otherwise. Cite this article:
Canons of Dort Facts for Kids. Kiddle Encyclopedia.