Jacobus Arminius (October 10, 1560 – October 19, 1609), is the Latin name of the Dutch theologian Jakob Harmenszoon. Arminius was a professor of theology at the University of Leiden from 1603 until he died in 1609. He wrote many books and papers on theology, which is the study of God, and his views became the basis for the Dutch Remonstrants.

Arminius, born in Oudewater, Utrecht, became an orphan while still young. His father Herman died, leaving his wife a widow with small children. His mother was killed during the Spanish massacre at Oudewater in 1575.

The pastor Theodorus Aemilius adopted Arminius and sent him to school in Utrecht, but died in 1574. Then Rudolph Snellius brought Arminius to Marburg and enabled him to study theology at the University of Leiden. Arminius remained a student at Leiden from 1576 to 1582. In 1603 he was called back to Leiden University to teach theology.

Arminius answered the call to pastor at Amsterdam in 1587, delivering Sunday and midweek sermons. After being tested by the church leaders, he was ordained in 1588. He gained a reputation as a good preacher and faithful pastor. 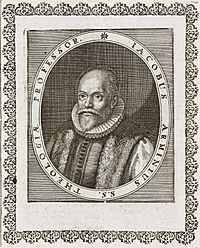 In 1590 he married Lijsbet Reael. He was commissioned to organize the educational system of Amsterdam, and is said to have done it well. He greatly distinguished himself by faithfulness to his duties in 1602 during a plague that swept through Amsterdam, going into infected houses that others did not dare to enter in order to give them water, and supplying their neighbors with funds to care for them.

John Wesley (1703–91), the founder of the Methodist movement, embraced Arminian theology and became its most prominent champion. Today[update], the majority of Methodists remain committed to Arminian theology, and Arminianism itself has become one of the dominant theological systems in the United States, thanks in large part to the influence of John and Charles Wesley.

All content from Kiddle encyclopedia articles (including the article images and facts) can be freely used under Attribution-ShareAlike license, unless stated otherwise. Cite this article:
Jacob Arminius Facts for Kids. Kiddle Encyclopedia.