The Canterbury Center Historic District is a historic district in Canterbury, Connecticut. The district is centered on the town green (Canterbury Green), located at the junction of Route 169 (North and South Canterbury Roads) and Route 14 (Westminster Road). It has been the town center since 1705, and includes a fine assortment of 18th and early 19th-century architecture. It was listed on the National Register of Historic Places (NRHP) in 1998.

The area that is now Canterbury was settled by English colonists around the turn of the 18th century, and was incorporated out of Plainfield in 1704. The town green was established on 3.5 acres (1.4 ha) of land purchased from Robert Green in 1705, for the purpose of erecting a meeting house, although a meeting house was not constructed until 1711. The present Congregational Church, a Federal Revival building built in the 1960s, stands on its site. The town's first cemetery, located just north of the green, was established about 1720. The town grew as a rural crossroads community, serving the local community and travelers on the two roads that intersect here. It was also the principal center of education in the town, with an early academy founded in the 1790s, and the groundbreaking school for African-American girls founded by Prudence Crandall in 1831. (The Prudence Crandall House, a National Historic Landmark, is now a museum standing in the district. The town's economic importance declined with the advent of the railroad (which bypassed it).

The historic district extends from the town green along the main roads. Most of the buildings in the district are residences, typically wood frame structures 1-1/2 or 2-1/2 stories in height. Almost all were built before about 1850, and are of Georgian Colonial, Federal, or Greek Revival style; there is only one house in the district in the later Italianate style. Non-residential buildings include two fraternal halls, a Grange hall and the Finnish Hall, and the library, which is housed a Greek Revival building that originally served as a one-room district schoolhouse. The 20th-century brick town hall, while not detracting from the historic character of the area, does not contribute to its historic significance. 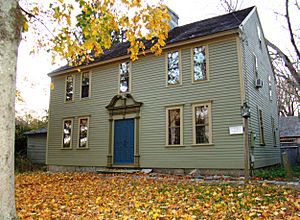 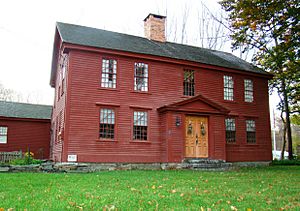 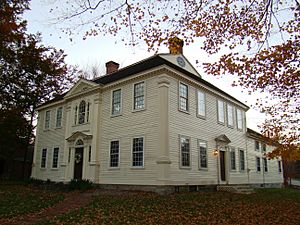 This 1805 Payne house would later raise controversy as the Prudence Crandell School for Negro Girls. Today it is a museum.

All content from Kiddle encyclopedia articles (including the article images and facts) can be freely used under Attribution-ShareAlike license, unless stated otherwise. Cite this article:
Canterbury Center Historic District Facts for Kids. Kiddle Encyclopedia.