Construction of the light 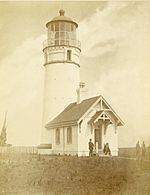 In a deed recorded in 1867, John D. and Mary West sold the United States a 47.3-acre (19.1 ha) tract of land. The Light-House board determined that the offshore reef and islands at Cape Blanco were dangerous to maritime commerce; therefore, a lighthouse was authorized for construction.

Over the next three years, the lighthouse was constructed under the direction of Lt. Col. Robert Stockton Williamson. Supplies were ordered and shipped to the cape. Bricks were deemed cheaper if made onsite, so a brickmaker was located and a deal was struck with Rancher Patrick Hughes for access to the required materials.

For many years, Keeper Langlois requested additional housing for the station. With his large family, the Hughes family, and the other families that came and went, the duplex was just too crowded. His requests went unanswered until 1909 when Head Keepers' quarters were constructed.

James Hughes found his own solution before the government responded. James owned land across the Sixes River from his father and quickly constructed a home for his family, moving from the lighthouse about the same time they finished additional lighthouse quarters. James continued to work at the lighthouse, commuting to assume his duties. 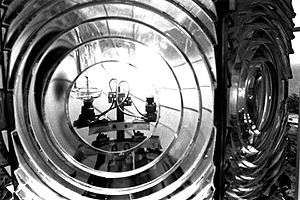 Life was difficult on the cape, which experiences constant high winds during the spring and summer and severe storms in winter. The weather kept the keepers busy with continual repairs and painting. Despite the hardship, both Langlois and Hughes stayed there until retirement.

All content from Kiddle encyclopedia articles (including the article images and facts) can be freely used under Attribution-ShareAlike license, unless stated otherwise. Cite this article:
Cape Blanco Light Facts for Kids. Kiddle Encyclopedia.