Cape Campbell Lighthouse is a lighthouse at Cape Campbell in the Marlborough region of the South Island of New Zealand. It is owned and operated by Maritime New Zealand. The original lighthouse at this site was first lit on 1 August 1870. However, this lighthouse was constructed of timber, and in 1898 these timbers were found to be decaying. This led to the construction of the current cast iron tower, which began operating in October 1905. 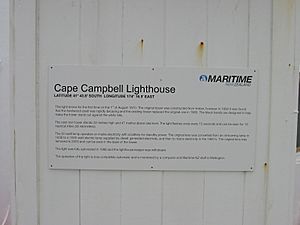 The light was originally fuelled by oil. In 1938 the oil lamp was replaced with an electric one powered by a local diesel generator. This was subsequently replaced by a connection to the mains grid in the 1960s. The light was fully automated in 1986 and is now managed from a control room in Wellington.

It featured in the 2016 film The Light Between Oceans.

All content from Kiddle encyclopedia articles (including the article images and facts) can be freely used under Attribution-ShareAlike license, unless stated otherwise. Cite this article:
Cape Campbell Lighthouse Facts for Kids. Kiddle Encyclopedia.