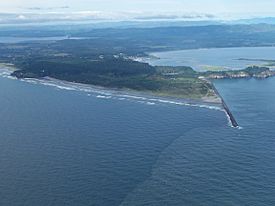 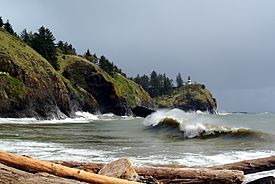 Cape Disappointment is a headland of the Pacific Northwest, located at the extreme southwestern corner of Washington, United States, on the north side of the Columbia River bar and just west of Baker Bay. The point of the cape is located on the Pacific Ocean in Washington's Pacific County, approximately two miles (3.2 km) southwest of the town of Ilwaco. Cape Disappointment sees about 2,552 hours of fog a year—the equivalent of 106 days—making it one of the foggiest places in the U.S.

The cape was named on July 6, 1788, by British fur trader John Meares, who was sailing south from Nootka Island, Canada, in search of trade. He mistook the mouth of the Columbia River to be a bay, which the ship could not enter due to a shallow shoal. Just missing the discovery of the river mentioned by Francisco Antonio Mourelle, he named them Cape Disappointment and Deception Bay. George Vancouver credits John Meares in his account when he saw Cape Disappointment on April 27, 1792.

All content from Kiddle encyclopedia articles (including the article images and facts) can be freely used under Attribution-ShareAlike license, unless stated otherwise. Cite this article:
Cape Disappointment (Washington) Facts for Kids. Kiddle Encyclopedia.