In 1862, during the American Civil War, a camp called Post at Cape Disappointment was established and fortifications existed here from that date to protect the northern approaches to the mouth of the Columbia River from possible attacks by Confederate raiders or foreign fleets. It was garrisoned by Company A, U.S. 9th Infantry Regiment and Company A, 8th Regiment California Volunteer Infantry in the District of Oregon. In 1863, its mate Fort Stevens was established on the south bank of the Columbia River. In 1864, the post was renamed Fort Cape Disappointment. Some Civil War-era fortifications still exist: the Tower (or Right) Battery, Left Battery, and Center Battery.

Fort Cape Disappointment was expanded and renamed Fort Canby in 1875. By 1906, when construction finished under the Endicott program, Fort Canby became part of the three-fort Harbor Defenses of the Columbia River as a subpost of Fort Stevens along with Fort Columbia. The fort was further expanded during World War II. After being decommissioned in the years following World War II, the fort was turned over to the state for use as a state park in the early 1950s. Workers with the Civilian Conservation Corps helped restore the fort and improved roads and trails during the 1930s. 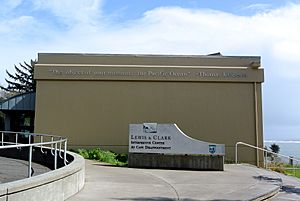 The Lewis and Clark Interpretive Center sits on a cliff that overlooks the confluence of the Columbia River and the Pacific Ocean. There are exhibits about the 1803–1806 Lewis and Clark Expedition from St. Louis, Missouri to the Pacific coast, the park's later history, including the lighthouses, U.S. Coast Guard and military activities, and the area's maritime and natural history. 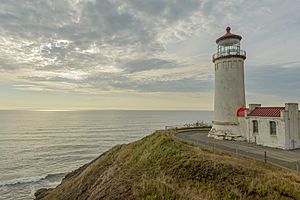 All content from Kiddle encyclopedia articles (including the article images and facts) can be freely used under Attribution-ShareAlike license, unless stated otherwise. Cite this article:
Cape Disappointment State Park Facts for Kids. Kiddle Encyclopedia.