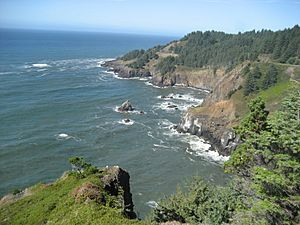 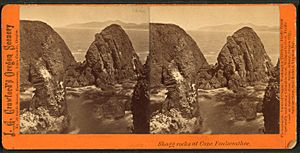 Cape Foulweather is a basalt outcropping 500 feet (150 m) above the Pacific Ocean on the central coastline of the U.S. state of Oregon - in Lincoln County, south of Depoe Bay. The cape is notable as the first promontory on the northwest coast of New Albion (as the area was then known) to be sighted and named by Captain James Cook, while on his third voyage around the world. His March 7, 1778 journal entry reads:

The cape can be viewed from Otter Crest State Scenic Viewpoint.

All content from Kiddle encyclopedia articles (including the article images and facts) can be freely used under Attribution-ShareAlike license, unless stated otherwise. Cite this article:
Cape Foulweather Facts for Kids. Kiddle Encyclopedia.