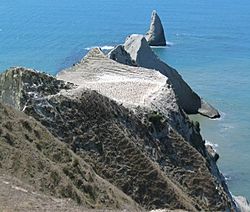 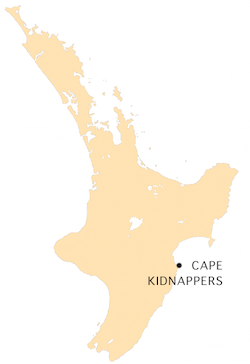 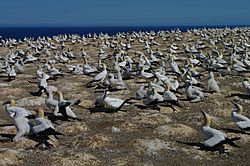 The gannet colony at Cape Kidnappers

Cape Kidnappers / Te Kauwae-a-Māui is a headland at the southeastern extremity of Hawke's Bay on the east coast of New Zealand's North Island and sits at the end of an 8 kilometres (5.0 mi) peninsula which protrudes into the Pacific Ocean. It is 20 kilometres (12 mi) south-east of the city of Napier. Access to the Cape by road stops at Clifton, which is the departure point for many tourists. The Cape Kidnappers Golf Course lies between the headland and the nearby coastal community of Te Awanga.

The headland was named after an attempt by local Māori to abduct a member of Captain Cook's crew aboard HMS Endeavour, during a landfall there on 15 October 1769. The crew member was Taiata, the 12 year old nephew or servant of Tupaia, the Tahitian arioi who served as the Endeavour's interpreter and guide. Cook's journal states that Taiata was over the side of the ship when a Maori fishing vessel approached the Endeavour offering to trade fish, before seizing the boy and attempting to flee with him. Sailors from Endeavour′s deck immediately opened fire on the fishing boat, killing two Māori and wounding a third.

Taiata promptly jumped overboard and swam back to Endeavour, while the remaining Māori paddled their craft back to shore. A 4-pounder cannon was fired after them from Endeavour′s quarterdeck, but the Māori boat was soon out of range.

“…one of the fishing boat came along side and offer’d us some more fish, the Indian Boy Tiata, Tupia’s servant being over the side, they seized hold of him, pulld him into the boat and endeavourd to carry him off, this obliged us to fire upon them which gave the Boy an oppertunity to jump over board and we brought the Ship too, lower’d a boat into the Water and took him up unhurt. Two or three paid for this daring attempt with the loss of their lives and many more would have suffered had it not been for fear of killing the boy. This affair occation’d my giveing this point of land the name of Cape Kidnappers…’

Cook described the cape as having steep white cliffs on either side, with two large rocks resembling hay stacks near the headland.

Following the passage of the Heretaunga Tamatea Claims Settlement Act 2018, the name of the headland was officially altered to Cape Kidnappers / Te Kauwae-a-Māui. The Māori portion of the name refers to 'the fish hook of Māui'.

The cape has been identified as an Important Bird Area by BirdLife International because it is a breeding site for over 3000 pairs of Australasian gannets.

All content from Kiddle encyclopedia articles (including the article images and facts) can be freely used under Attribution-ShareAlike license, unless stated otherwise. Cite this article:
Cape Kidnappers Facts for Kids. Kiddle Encyclopedia.