There are eleven timber flights of stairs in the lighthouse, with twenty steps each, which must be climbed in order to reach the top. Surrounding the lighthouse are the remains of a number of associated buildings, including a small church. There are also a number of gravestones, many belonging to those who were shipwrecked in the area after the lighthouse was built.

The lighthouse was originally established in 1861, in response to the sinking of the barque Cataraqui sixteen years earlier, a disaster which had resulted in the deaths of 400 people.

There are certain lawless men who have taken up their residence on the island who make a practice of annoying the Superintendent in every possible way, destroying his cattle, pulling down the fences and taking his hay and in fact they say they are determined to make the place too hot for him, and I much fear it will end in some serious injury to the station or perhaps to the light itself.

—from Guiding Lights by Katherine Stanley 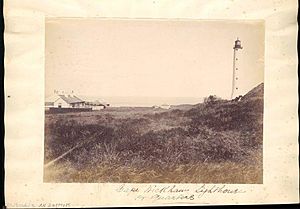 The lighthouse circa 1887. The superintendent's quarters can be seen to the left.

The superintendents were required to be extremely self-sufficient, as only one supply ship visited the site a year. Some of the lightkeepers resorted to looting and theft to supplement these supplies, with one keeper being dismissed for storing goods that his brother had looted from a shipwreck.

In the 1920s, it was determined that it was no longer necessary for the light to be manned on a full-time basis, and automation systems were added to the lighthouse. At this time, a number of the surrounding buildings were also demolished, including the superintendent's residence. The lighthouse continued to be looked after by the lighthouse keeper from nearby Currie.

All content from Kiddle encyclopedia articles (including the article images and facts) can be freely used under Attribution-ShareAlike license, unless stated otherwise. Cite this article:
Cape Wickham Lighthouse Facts for Kids. Kiddle Encyclopedia.