Captain Jack's Stronghold, named for Modoc chief Captain Jack (Kintpuash in Modoc), is a part of Lava Beds National Monument. The stronghold can be accessed from the Perez turnoff, off Highway 139 between Tulelake and Canby, California. The Modoc people had long used this area for hunting and gathering as it was part of their traditional territory.

During the Modoc War, Captain Jack's band settled here following the Battle of Lost River. With only 53 warriors, and numerous women and children in their band of 160, for several months they held off a United States Army force outnumbering them by as much as 10 to 1. The Modoc used the lava beds as a defensive stronghold because of the rough terrain, rocks that could be used in fortification, and irregular pathways to evade pursuers.

In the First Battle of the Stronghold, January 17, 1873, 51 Modoc warriors defeated a U.S. Army force of 225 soldiers supported by 104 Oregon and California volunteers, killing 35 and wounding several others, while suffering no deaths or serious woundings.

During the Second Battle of the Stronghold, April 15–17, the reinforced Army force of over six hundred men captured the Modoc spring and cut off their route to Tule Lake, forcing the Modoc to disperse when their water supplies ran out. After fleeing the Stronghold, the band of Modoc splintered, and the last group, made up of Captain Jack, John Schonchin, Black Jim, and Boston Charley, were captured on June 1, 1873. All four were hanged on October 3, 1873, at Fort Klamath, convicted of war crimes in the April 1873 murders of General Edward Canby and Reverend Eleazer Thomas at a peace commission meeting. Canby was the only general to be killed in the Indian Wars. 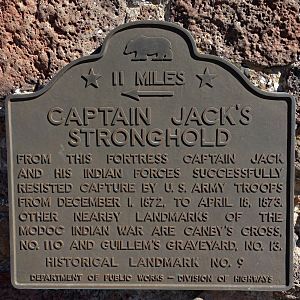 All content from Kiddle encyclopedia articles (including the article images and facts) can be freely used under Attribution-ShareAlike license, unless stated otherwise. Cite this article:
Captain Jack's Stronghold Facts for Kids. Kiddle Encyclopedia.