Carabiniers of Chile facts for kids 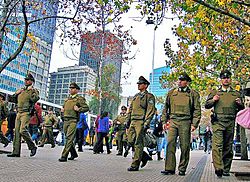 The Carabiniers of Chile, (Spanish: Carabineros de Chile) are the uniformed Chilean national police force and gendarmerie. This institution was created and founded on April 27, 1927. Their main mission is to keep the public order according with the Chilean laws. Since 2011, the institution is under the full control of the Ministry of the Interior and Public Security.

In coordination of this institution, the Investigations Police of Chile works also under the control of the Ministry of the Interior and Public Security.

All content from Kiddle encyclopedia articles (including the article images and facts) can be freely used under Attribution-ShareAlike license, unless stated otherwise. Cite this article:
Carabiniers of Chile Facts for Kids. Kiddle Encyclopedia.