Carbon Cliff is a village in Rock Island County, Illinois, United States. The population was 1,689 at the 2000 census. It lies in the south part of Hampton Township.

There were 683 households out of which 32.7% had children under the age of 18 living with them, 48.6% were married couples living together, 12.7% had a female householder with no husband present, and 33.5% were non-families. 26.1% of all households were made up of individuals and 7.8% had someone living alone who was 65 years of age or older. The average household size was 2.43 and the average family size was 2.92.

The Chicago and Rock Island railroad (later the Chicago, Rock Island & Pacific) reached Carbon Cliff in 1854. By the mid-19th century, Carbon Cliff had become a coal mining center, and was named for the many coal mines that dotted the bluff west of town. The Carbon Cliff mines were the earliest worked on the west side of the Rock River. Stoehr & Schadt Coal Co and others mined extensively for many years, but by the beginning of the 20th century the limited supply of coal was nearly exhausted and mining there was discontinued.

On November 13, 1906 voters of Hampton territory petitioned the county court for permission to incorporate as a village. The citizens voted and with 55 to 28 in favor, Carbon Cliff was incorporated on December 8, 1906.

The Carbon Cliff bluffs were also known as an excellent source of clay. The Argillo Works was formed in 1865 to produce fire brick and farm-drain tile. Argillo's products were sold throughout the country and was one of the leading industries of Rock Island County. In the 1930s, fire destroyed the plant's offices and buildings and the firm went out of business.

From Economical Geology of Illinois, a geological survey by Illinois State Geologist A. H. Worthen, published 1882:

The best [pottery establishment] perhaps, in this part of the state, is located at Carbon Cliff, within a few yards of the railroad station of the same name. Many years ago a company was formed for the purpose of mining coal in the Carbon Cliff bluffs. The company operated the mines, with varying success, until the coal practically became exhausted. The fine strata of potter's clay outcropping all along the exhausted coal seam then attracted attention. A pottery was started... the buildings are of brick, the principal one is similar to a large railroad round house, with a towering smoke stack in the center. Around this has sprung up a little village, dependant for existence upon this single manufactory." 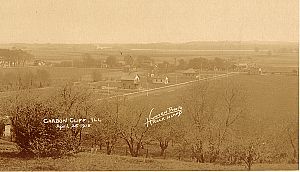 All content from Kiddle encyclopedia articles (including the article images and facts) can be freely used under Attribution-ShareAlike license, unless stated otherwise. Cite this article:
Carbon Cliff, Illinois Facts for Kids. Kiddle Encyclopedia.