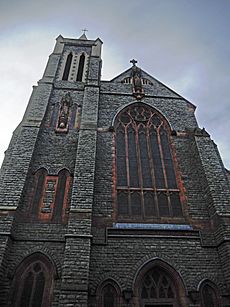 The original church was built at a cost of £2,124 in 1842, after fundraising in Wales and Ireland and a donation by Lady Catherine Eyre of Bath. The church was located on David Street, Cardiff and was dedicated to the patron saint of Wales, St David, at the request of Lady Eyre.

The current building was designed by Pugin and Pugin Architects and constructed 1884–87. It was Cardiff's principal Catholic church, and it became seat of the Roman Catholic Archbishop of Cardiff in 1916. In 1920 it was declared the Cathedral Church of the new Archdiocese of Cardiff.

The Cathedral was destroyed by World War II bombing in March 1941 when incendiary bombs pierced the roof. During the 1950s it was restored and rebuilt, under the supervision of F. R. Bates, Son, and Price and was re-opened in March 1959.

The Boys' Choir was established in 1959, and in recent years the choir has expanded, and now comprises 65 boys and girls, student choral scholars and professional lay clerks.

The cathedral boy choristers and girl choristers are educated at the Choir School in St John's College, Cardiff, founded by Dr David Neville in 1987 as the Choir-school to the Metropolitan Cathedral.

Dr David Neville, Founding Principal of the Choir School St John's College and Cathedral Director of Music and Organist 1980-2016, received the Papal Cross Pro Ecclesia et Pontifice in 1991 for his services to cathedral music, and in 1997 he was a first recipient of the Archbishop of Wales Award for Church Music, chaired by George Guest CBE. In December 2015, David received a Papal Knighthood of the Order of St Gregory in recognition of his lifetime of service. David's last service at the Cathedral before his sudden death in April 2016 was a live broadcast on BBC Radio 4 in January before an audience of 1.6 million. As a composer, David wrote works on a vast scale for chorus and orchestra, including The Wreck of the Deutschland directed by the internationally renowned conductor Vernon Handley at Hereford Cathedral. He was commissioned by the Welsh Arts Council, the Elgar Festival and the BBC, and his compositions have been performed in BBC broadcast and at Westminster Abbey and St Paul's Cathedral. In the year 2000, David was commissioned to compose a royal fanfare for the National Millennium Service attended by Princes Charles, William and Harry.

On returning to Wales from Pembroke College Cambridge, David was Assistant Conductor of the BBC National Chorus of Wales and served as Head of Chemistry, Head of Science and Deputy Head in four large secondary schools. In 1980 he was appointed Director of Music and Organist at Cardiff Metropolitan Cathedral. The Cathedral's voluntary choir of boys and men flourished and in 1982 he directed the music for the visit of Pope John Paul II. It was his vision to create a choir school for the Cathedral that would lead him to take on the great challenge of regenerating the closed De la Salle prep school. From humble beginnings, and with only 85 pupils and a modest seven room single-storey building, David created St John's College in 1987. Under his leadership, St John’s College has become recognised as one of the UK's leading independent schools. It comprises more than 500 pupils aged 3-18 and maintains the best A Level record in Wales over 16 years. It has been rated 'Excellent' by Her Majesty's Inspectorate, and is frequently top school in Wales in The Sunday Times 'Parent Power'. With the daily rehearsals afforded by the new choir school, the Cathedral Choir quickly gained a reputation for the finest standards of performance, touring continental Europe and making several recordings under the Herald label. David's three sons all sang in the Cathedral Choir and were educated at St John's College before taking up choral scholarships at Magdalen College, Oxford, and King’s College, Cambridge. The Cathedral Choir flourishes under his sons, Dominic and James.

Under the direction of Dominic Neville, the choir sings four annual concerts in Cardiff at St David's Hall and the Dora Stoutzker Concert Hall at the Royal Welsh College of Music and Drama, and at leading venues across the UK such as Westminster Abbey, Christ Church Cathedral Oxford and St Paul's Cathedral London. International tours have included performances at Notre Dame Cathedral and the Madeleine Paris, Madrid and El Escorial (Spain), and the cathedrals of Ghent and Bruges (Belgium), Haarlem (Netherlands) and Ribe (Denmark). The Choir has performed in collaboration with The Schola of Brompton Oratory London, Chamber Strings of Melbourne Australia, St Bavo Cathedral Choir in Haarlem, Netherlands, Tennessee Tech Chorale, Philadelphia Boys Choir, Uppingham School Choir, and Gonville and Caius Chapel Choir Cambridge. In a collaboration with conductor David Atherton, the trebles have sung in collaborations with BBC National Chorus of Wales and BBC National Orchestra of Wales (Britten Spring Symphony / Atherton) broadcast on BBC Radio 3. In 2012, the choir sang with The Tallis Scholars’ performance of Tallis's forty stave motet Spem in Alium, conducted by Peter Phillips at St David's Hall. Other recent performances include singing for His Royal Highness, the Prince of Wales at the Opening of the Cornerstone, where the choir sang from the David Neville Gallery.

Under the direction of Dominic Neville, the choristers appeared and sang in the 'Christmas Special' of BBC's Doctor Who and sang in the major Hollywood feature film One Chance. One of the choir's leading trebles, Dylan Oshnoei, also sang in the acclaimed BBC production The Hollow Crown.

The choirs can be heard in live broadcasts, on BBC Radio 4 before an audience of 1.6 million, and BBC Radio Wales.

The Director of Music is Dominic Neville, the Master of the Choristers is James Neville, and the Organ Scholar is Joseph Cavalli-Price.

The Dean (Administrator) of the Cathedral is the Very Rev. Canon Peter Collins.

All content from Kiddle encyclopedia articles (including the article images and facts) can be freely used under Attribution-ShareAlike license, unless stated otherwise. Cite this article:
Cardiff Metropolitan Cathedral Facts for Kids. Kiddle Encyclopedia.