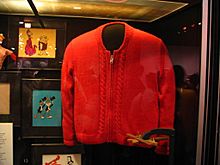 A cardigan is a type of knitted sweater that has an open front.

Commonly cardigans have buttons: a garment that is tied is instead considered a robe. A more modern version of the garment has no buttons and hangs open by design. The name "Cardigan" is an anglicised variation of the Welsh placename Ceredigion.

The term originally referred only to a knitted sleeveless vest, but expanded to other types of garment over time.

Plain cardigans are often worn over shirts and inside suit jackets as a less formal version of the waistcoat or vest that restrains the necktie when the jacket has been removed.

All content from Kiddle encyclopedia articles (including the article images and facts) can be freely used under Attribution-ShareAlike license, unless stated otherwise. Cite this article:
Cardigan (sweater) Facts for Kids. Kiddle Encyclopedia.