Kids Encyclopedia Facts
The Caribbean water resource region is one of 21 major geographic areas, or regions, in the first level of classification used by the United States Geological Survey to divide and sub-divide the United States into successively smaller hydrologic units. These geographic areas contain either the drainage area of a major river, or the combined drainage areas of a series of rivers.

The Caribbean region, which is listed with a 2-digit hydrologic unit code (HUC) of 21, has an approximate size of 3,582 square miles (9,280 square kilometers), and consists of 3 subregions, which are listed with the 4-digit HUCs 2101 through 2103. This region includes the drainage within: (a) the Commonwealth of Puerto Rico; (b) the Virgin Islands of the United States; and (c) other United States Caribbean outlying areas. Includes Caribbean land areas over which the United States has some degree of interest, jurisdiction, or sovereignty. 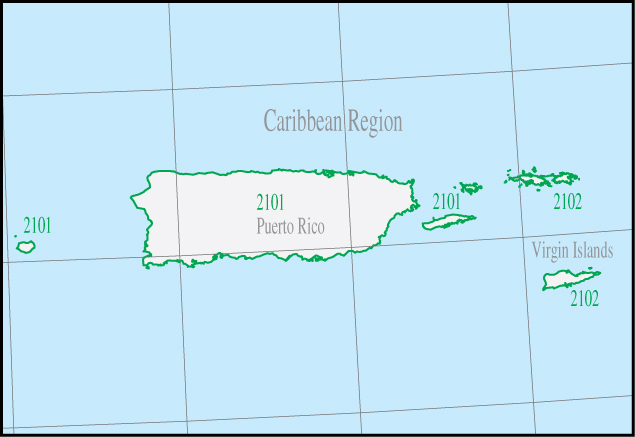 The Caribbean region, with two of its three 4-digit subregion hydrologic unit boundaries.

All content from Kiddle encyclopedia articles (including the article images and facts) can be freely used under Attribution-ShareAlike license, unless stated otherwise. Cite this article:
Caribbean water resource region Facts for Kids. Kiddle Encyclopedia.