Kids Encyclopedia Facts
This page is about the ghost town. For the recording studio, see Caribou Ranch. 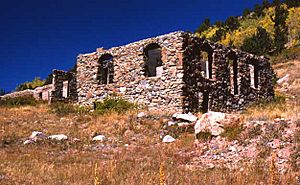 Caribou is a former silver-mining town, now a ghost town near Nederland in Boulder County, Colorado, United States. It was named after the Caribou silver mine nearby. The Caribou Ranch recording studio is several miles away, on the road from Nederland up to Caribou. 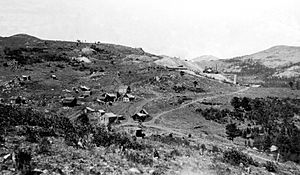 A prospector named Conger discovered placer gold downstream from Caribou in 1861. He eventually followed the gold up Coon Trail Creek, and discovered the first silver vein in what later became the Caribou district.

Caribou was established about 1870 to house miners from the Caribou silver mine. The town had one church, three saloons, a brewery, and its own newspaper, the Caribou Post. The Caribou mine was sold for $3 million in 1871 to Dutch investors, but the new owners found that the best ore had already been removed. The mine struggled until 1876, when controversial Colorado entrepreneurs Jerome B. Chaffee and David Moffat bought the mine, incorporated it, and sold shares in New York. A fire burned down the town in 1879. By the 1920s, Caribou was home to fewer than 50 people. At its peak in 1875, Caribou's population was estimated to be about 3,000 people.

Caribou and its silver mines were completely deserted by the time 19-year-old geology student Tom Hendricks saw it in 1970, but Hendricks became convinced that the silver mines at Caribou could make a profit, and has made the mines his life work. After he got his geology degree, he acquired the old Cross mine in 1973, and began shipping silver concentrate in 1977. He acquired the famous Caribou mine in 1980. He has struggled to keep the Cross and Caribou mines operating through low silver prices in recent years.

William Henry Jackson took a picture of the town in 1877, and well-known Colorado photographer John Fielder took another photograph of the same view in 1998. Only two stone ruins, and one collapsed wooden cabin remain of the town.

All content from Kiddle encyclopedia articles (including the article images and facts) can be freely used under Attribution-ShareAlike license, unless stated otherwise. Cite this article:
Caribou, Colorado Facts for Kids. Kiddle Encyclopedia.