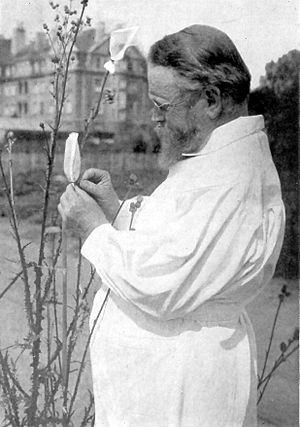 Carl Erich Correns (10 September 1864 – 14 February 1933) was a German botanist and geneticist. His research into heredity led to his rediscovery of Gregor Mendel's earlier work.

Correns grew hybrids of peas, and of maize, and reached the same interpretation as Mendel, in 1899.

The occurrence of cases in which the heterozygote is intermediate (the absence of dominance) was added in a footnote to his 1900 paper. That dominance was not always present had been seen and understood by Mendel, according to his letters to Nägeli. By a quirk of history Correns was a student of Nägeli, a renowned botanist with whom Mendel corresponded about his work with peas. Nägeli failed to understand how significant Mendel's work was.

In 1913 Correns became the first director of the newly founded Kaiser Wilhelm Institute for Biology in Berlin-Dahlem.

Correns produced the first evidence of cytoplasmic inheritance, in his 1909 paper on variegated leaf colour in Mirabilis jalapa. The basis of this inheritance is that chloroplasts, the organelles which conduct photosynthesis, are inherited solely from the maternal parent.

All content from Kiddle encyclopedia articles (including the article images and facts) can be freely used under Attribution-ShareAlike license, unless stated otherwise. Cite this article:
Carl Correns Facts for Kids. Kiddle Encyclopedia.