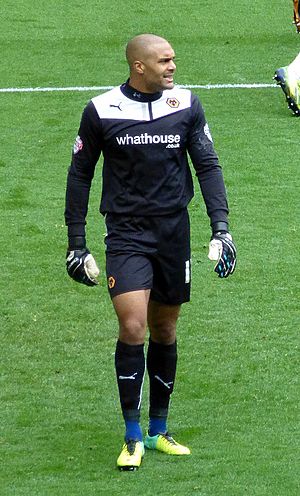 Ikeme playing for Wolverhampton Wanderers in 2014

Carl Onora Ikeme (born 8 June 1986) is a former professional footballer who played as a goalkeeper.

Ikeme spent all of his career at Wolverhampton Wanderers, making 207 appearances in total. He was part of the Wolves teams that won the Championship in 2009 and League One in 2014. Clubs he spent time loaned at were Accrington Stanley, Stockport County, Charlton Athletic, Sheffield United, Queens Park Rangers, Leicester City, Middlesbrough and Doncaster Rovers. Although he was born and raised in England, but chose to represent Nigeria internationally. He played for the Nigeria national team ten times. In July 2017, it was stated he had acute leukaemia. He said he was in remission in June 2018. He retired from professional football the following month.

Ikeme was born in Sutton Coldfield, Birmingham. His father is Nigerian.

All content from Kiddle encyclopedia articles (including the article images and facts) can be freely used under Attribution-ShareAlike license, unless stated otherwise. Cite this article:
Carl Ikeme Facts for Kids. Kiddle Encyclopedia.