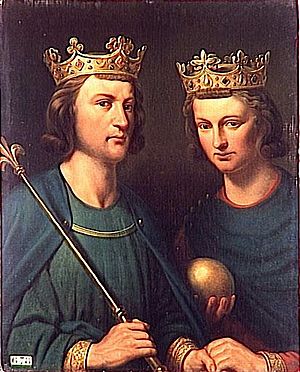 Carloman II of France (c. 866 – 12 December 884), king of Western Francia, was the youngest son of King Louis the Stammerer and Ansgarde. He and his brother Louis III of France shared the kingship when their father died in 879. Carloman became sole king in 882 when his brother died.

Carloman had problems with Viking raiders during his reign. He died while hunting on December 12, 884.

All content from Kiddle encyclopedia articles (including the article images and facts) can be freely used under Attribution-ShareAlike license, unless stated otherwise. Cite this article:
Carloman II of France Facts for Kids. Kiddle Encyclopedia.