The Carlton Hotel is a luxury hotel located in Atascadero, California, along the state's Central Coast in San Luis Obispo County. Construction began in 1928, with the hotel officially opening its doors in 1929. After several decades of local popularity and notoriety, by the early 1980s the property had fallen into deep disrepair.

Panorama view of the lobby of the Carlton Hotel in Atascadero. 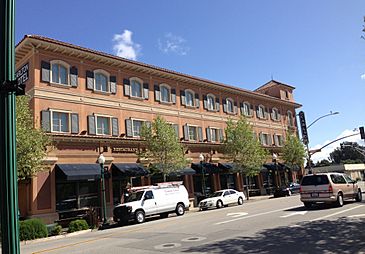 Exterior of the Carlton Hotel in Downtown Atascadero as seen on Tuesday, April 7, 2015.

During this time, the dilapidation had degenerated into such extent that several local bands would play in the dark and abandoned lobby, and the gold-plated hands of the tower clock were stolen - sometime in the late 1970s.

In 1999, a joint-venture, formed between David Weyrich, David Crabtree and Steve Landaker, purchased the hotel and embarked on a massive renovation project. They successfully reopened the facility in 2004. The hotel now boasts an artisanal Bakery & Cafe and has plans to open a restaurant in the future.

All content from Kiddle encyclopedia articles (including the article images and facts) can be freely used under Attribution-ShareAlike license, unless stated otherwise. Cite this article:
Carlton Hotel (Atascadero, California) Facts for Kids. Kiddle Encyclopedia.