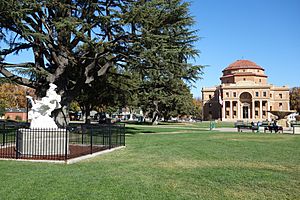 Atascadero (Spanish for "Mire") is a city in San Luis Obispo County, California, about equidistant from Los Angeles and San Francisco on U.S. Route 101. Atascadero is part of the San Luis Obispo-Paso Robles metropolitan statistical area, which encompasses the extents of the county. Atascadero is farther inland than most other cities in the county, and as a result, usually experiences warmer, drier summers, and cooler winters than other nearby cities such as San Luis Obispo and Pismo Beach. The main freeway through town is the U.S. 101. The nearby State Routes 41 and 46 provide access to the Pacific Coast and the Central Valley of California. 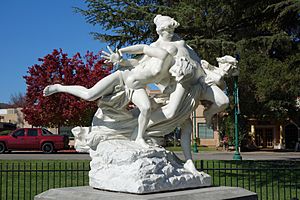 Wrestling Bacchantes in the Sunken Gardens 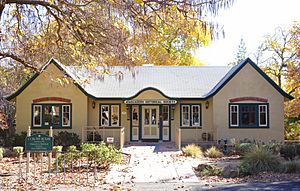 Atascadero is a Spanish word loosely translated as bog, from the verb "atascar" which means to become stuck or hindered. Also, in the Chumash language, Atascadero translates into a place of much water.

The area was originally home to the Salinan Indians. In the half century between 1769 and 1823 the Spanish Franciscans established 21 missions along the California coast, including the nearby Mission San Miguel Arcángel, and Mission San Luis Obispo de Tolosa. In 1821, Mexico won its independence from Spain, and California became a Mexican province. In 1833, the Mexican government secularized the mission lands. Mexican Governor Juan Alvarado granted Rancho Atascadero to Trifon Garcia in 1842, and Pio Pico granted Pedro Estrada Rancho Asuncion in 1845. Patrick Washington Murphy held ownership of 61,000 acres (25,000 ha) at one time.

Edward Gardner Lewis, a magazine publisher from the East, founded Atascadero in 1913 as a utopian, planned colony. He had previously created such a community, at University City, Missouri. After purchasing the Atascadero Ranch in 1912, Lewis put together a group of investors, paid J.H. Henry $37.50 per acre ($93/ha), and celebrated acquisition of the ranch on July 4, 1913. As investors came to homestead the land that they had bought with their down payments, the area was transformed into a "tent city" with tents situated on land now occupied by Century Plaza and Bank of America. Lewis employed the services of experts in agriculture, engineering and city planning to develop his dream colony for the anticipated 30,000 residents. In 1914 the land was surveyed and subdivided. Thousands of acres of orchards were planted, a water system was installed, and construction began on an 18 mi (29 km) road (now Highway 41 west) through the Santa Lucia Mountains to the ocean (Morro Bay), where Lewis built cottages and a beachfront hotel called the Cloisters.

The first civic building in Atascadero, The Printery, had the first rotogravure presses west of Chicago. Lewis then published the Atascadero News newspaper and the Illustrated Review, a photo/news magazine. The centerpiece of Lewis' planned community was an Italian Renaissance-style building, which was the home to Atascadero City Hall and the Museum until it was damaged in the 2003 earthquake. After significant upgrades and renovations, the building was re-opened in August, 2013. Built between 1914 and 1918 with bricks made from local clay, this unique and beautiful building has become one of California's Historical Landmarks (No. 958).

Founded in 1913 by Edward Gardner Lewis and incorporated in 1979, the Atascadero Colony as it was known at the time was originally envisioned as a model community. Little evidence of Atascadero's original architecture and urban design remain, as historic buildings and homes have been torn down to make way for more modern developments and the Sunken Gardens bisected by U.S. Route 101. One of the few surviving examples of original urban design can be found, however, in the Rotunda Building located near the Junior High School on Palma Avenue in the Sunken Gardens public park. Designed by Walter D. Bliss of San Francisco, construction was completed in 1918 at a cost of $180,000. It was the headquarters for the Atascadero Colony, built of reinforced concrete and locally produced brick, it had also served as a private school for boys, a veteran's memorial building, and county offices. Location: 6500 Palma Ave, Atascadero. This building was purchased by San Luis Obispo County in the 1950s as a Memorial Building. The building housed the county library, Atascadero Historical Social Museum and then the city offices following incorporation in 1979. The historic City Hall is adorned with a 40 ft (12 m) dome atop the third story, originally intended to house the library. The building was designated a California Historical Landmark. The City Hall was damaged by the magnitude 6.5 San Simeon earthquake on the morning of December 22, 2003.

Another example of Atascadero's early architecture is The Carlton Hotel, built in 1929, located just west of the Sunken Gardens on El Camino Real, the city's main commercial street. Vacant since 1987, the building was rejuvenated, costing an estimated $15 million and completed in 2003.

The Skytherm house was developed in Atascadero. This private home pioneered solar powered cooling and heating using an integrated rooftop water system. Solar roof ponds are unique solar heating and cooling systems developed by Harold Hay in the 1960s. A basic system consists of a roof-mounted water bladder with a movable insulating cover. This system can control heat exchange between interior and exterior environments by covering and uncovering the bladder between night and day. When heating is a concern the bladder is uncovered during the day allowing sunlight to warm the water bladder and store heat for evening use. When cooling is a concern the covered bladder draws heat from the building's interior during the day and is uncovered at night to radiate heat to the cooler atmosphere. The Skytherm house in Atascadero, California uses a prototype roof pond for heating and cooling.

Atascadero is nearby the Carrizo Plain, a center for large scale photovoltaic solar energy projects that are planned to reach the gigawatt scale by 2012. 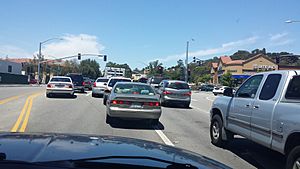 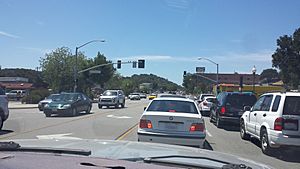 Downtown Atascadero is home to First-Class Art galleries, restaurants, micro-breweries, wine bars and entertainment. There are many redevelopment projects underway and planned in downtown including the rebuilding of Colony Square (the downtown entertainment district).

Atascadero is at the intersection of U.S. 101 and State Route 41, about halfway between Los Angeles and San Francisco on U.S. 101 with direct eastbound access to the San Joaquin Valley and Interstate 5. Atascadero is currently serviced by one freeway and one highway:

Lake Nacimiento is an 18-mile (29 km)-long lake located about 23 miles (37 km) north-west of the city up in the Santa Lucia Range. The lake provides ample room for waterskiing, wakeboarding, jetskiing, and other water-related activities, in addition to fishing and swimming.

The Atascadero City Hall, also known as the Rotunda, is an icon of the city. Constructed in 1918, this was the founder E.G. Lewis's vision for the Utopian community of Atascadero. In 2003, the historic building was damaged by the magnitude 6.6 San Simeon earthquake. The city took over a bowling alley for use as a temporary city hall while the building underwent extensive renovations and retrofitting. In August 2013, after ten years of closure, the original city hall building was reopened and currently remains in service.

The Ranger House is located in the Atascadero Lake Park near the Pavilion.

In the Emergency! episode Women, a child (Lance Kerwin) suffers from hemlock poisoning, and Dr Brackett (Robert Fuller) mentions there was a case like this in Atascadero.

Atascadero is the setting for the novel "Pay It Forward".

In the movie "The Grifters" (1990) Atascadero is mentioned as the place a former partner-in-crime of Myra Langtry, played by Annette Bening, has retired to—insinuating that he became an inmate in Atascadero State Hospital for the criminally insane.

All content from Kiddle encyclopedia articles (including the article images and facts) can be freely used under Attribution-ShareAlike license, unless stated otherwise. Cite this article:
Atascadero, California Facts for Kids. Kiddle Encyclopedia.