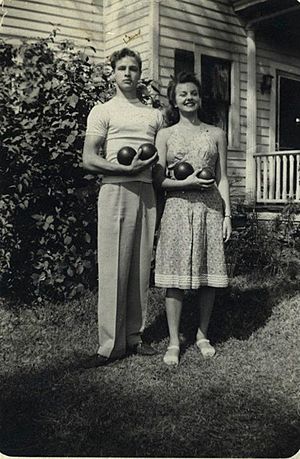 Carmelita Pope (April 15, 1924 – April 3, 2019), also known by her stage name Carla Dare, was an American actress. She was best known for her roles in stage productions. In 1947, she appeared in the Broadway play A Streetcar Named Desire. She also acted in television series such as General Hospital, Days of Our Lives, They Stand Accused, Down You Go and The Amazing Spider-Man.

Pope was born in Chicago, Illinois. She was a childhood friend of actor siblings Jocelyn and Marlon Brando. She was married twice and had two sons. She lived in Boise, Idaho.

All content from Kiddle encyclopedia articles (including the article images and facts) can be freely used under Attribution-ShareAlike license, unless stated otherwise. Cite this article:
Carmelita Pope Facts for Kids. Kiddle Encyclopedia.