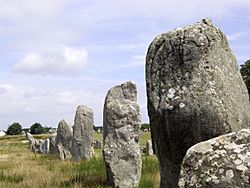 The Ménec alignments, the most well-known megalithic site amongst the Carnac stones. 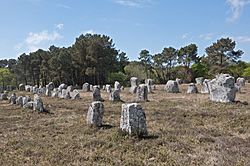 Stones in the Kerlescan alignments

The Carnac stones are the largest collection of megalithic standing stones in the world. The more than 3,000 prehistoric standing stones were cut from local rock and erected by the pre-Celtic people of Brittany.

The stones were erected at some stage during the Neolithic period, probably around 3300 BC, but some may be as old as 4500 BC. The stones occur in a number of Neolithic sites around the French village of Carnac, in Brittany. They include rows of stones (alignments), dolmens, tumuli and single menhirs.

In recent centuries, many of the sites have been neglected, with reports of dolmens being used as sheep shelters, chicken sheds or even ovens. Stones have been removed to make way for roads, or used as building materials. The management of the sites is a controversial topic.

There are three major groups of stone rows — Ménec, Kermario and Kerlescan — which may have once formed a single group, but have been split up as stones were removed for other purposes. 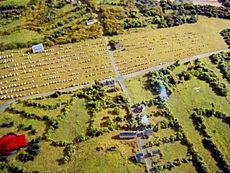 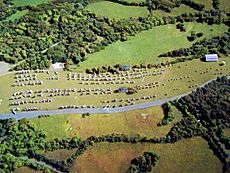 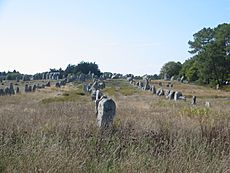 Stones in the Kermario alignment 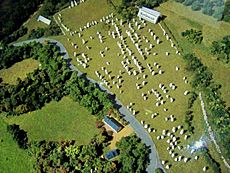 Eleven converging rows of menhirs stretching for 1,165 by 100 metres (3,822 by 328 ft). There is what may be the remains of stone circles at either end. According to the tourist office there is a "cromlech containing 71 stone blocks" at the western end and a very ruined cromlech at the eastern end. The largest stones, around 4 metres (13 ft) high, are at the wider, western end; the stones then become as small as 0.6m high along the length of the alignment before growing in height again toward the extreme eastern end.

Kermario (House of the Dead) alignment

This fan-like layout recurs a little further along to the east in the Kermario alignment. It consists of 1029 stones in ten columns, about 1,300 m (4,300 ft) in length. A stone circle to the east end, where the stones are shorter, was revealed by aerial photography.

A much smaller group, further east again of Kerlescan, falling within the commune of La Trinité-sur-Mer. These are now set in woods, and most are covered with moss and ivy.

There are several tumuli, mounds of earth built up over a grave. In this area, they generally feature a passage leading to a central chamber which once held neolithic artefacts. 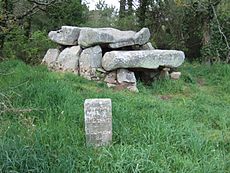 The dolmen Er-Roc'h-Feutet. An inscription next to every standing stone formation proclaims ownership by the state of France. 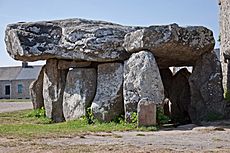 There are several dolmens scattered around the area. These dolmens are generally considered to have been tombs, however the acidic soil of Brittany has eroded away the bones. They were constructed with several large stones supporting a "capstone", then buried under a mound of earth. In many cases, the mound is no longer present, sometimes due to archeological excavation, and only the large stones remain, in various states of ruin. 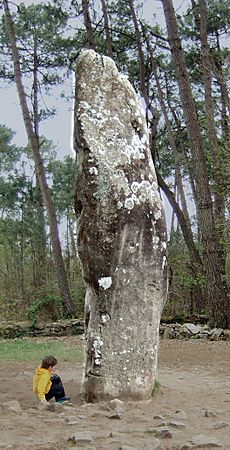 There are some individual menhirs and at least one other formation which do not fit into the above categories.

An arrangement of stones to form the perimeter of a large rectangle. Originally a "tertre tumulus" with a central mound, it is 37 m (121 ft) long, and aligned to east of northeast. The quadrilateral is 10 m (33 ft) wide to the east, but only 7 m (23 ft) wide at the west.

All content from Kiddle encyclopedia articles (including the article images and facts) can be freely used under Attribution-ShareAlike license, unless stated otherwise. Cite this article:
Carnac stones Facts for Kids. Kiddle Encyclopedia.