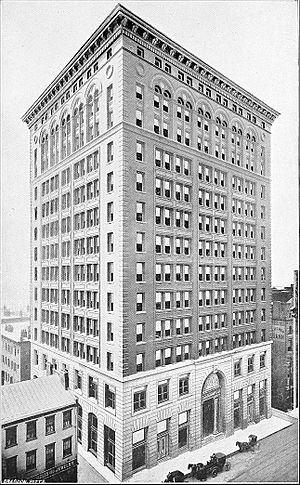 View of the Carnegie Building in 1905 by photographer John C. Bragdon

The Carnegie Building, also known as the Carnegie Steel Building, was a high-rise building in Pittsburgh, Pennsylvania. The structure started construction in 1893 and was completed in 1895 as the city's tallest at the time. It was the first steel-framed skyscraper in Pittsburgh upon completion. The building served as the world headquarters of Carnegie Steel Company, a steel producing company of the late 19th century created by industrialist and philanthropist Andrew Carnegie to manage steel mills in the city, and later to become U.S. Steel. The building was a Downtown Pittsburgh landmark and was located at 428-438 Fifth Avenue. It was torn down in 1952 for an expansion of Kaufmann's flagship store.

All content from Kiddle encyclopedia articles (including the article images and facts) can be freely used under Attribution-ShareAlike license, unless stated otherwise. Cite this article:
Carnegie Building (Pittsburgh) Facts for Kids. Kiddle Encyclopedia.