Carol Buckley (born May 18, 1954) is an American elephant caregiver, specializing in the trauma recovery and on-going physical care of captive elephants.

In 2010, Buckley founded Tennessee-based Elephant Aid International, and began consulting worldwide to help improve the lives of captive elephants and their mahouts.

While a student at Moorpark College in 1974, Buckley noticed a baby elephant, Fluffy, that a local tire dealer had bought to market his wares. Buckley volunteered to feed and care for the elephant, and a year later, borrowed $25,000, bought Fluffy, changed her name to Tarra, and founded Tarra Productions.

By 1980, when Tarra was six years old and a playful pre-adolescent elephant, Buckley taught Tarra to roller skate. For their first 15 years together, Buckley lived with, cared for, trained, transported and performed with Tarra in circuses and zoos in the US and Canada.

In 1984 Buckley began thinking that the life she and Tarra were living did not meet Tarra's psychological needs, and began to search for a better life for Tarra in a variety of zoos and animal parks where she worked and consulted, but the animal seemed to be bored in confinement. In the end, Buckley began looking for another option. 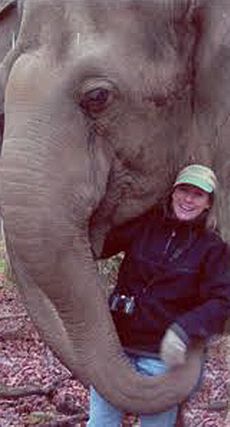 In November 1994, Buckley, with a bank loan, bought 112 acres in Hohenwald, Tennessee. Buckley built a barn for Tarra and co-founded the Elephant Sanctuary (Hohenwald) in Tennessee, the first natural habitat refuge for sick, old and needy elephants. Today, the Elephant Sanctuary (Hohenwald) is 2,700 acres (1,100 ha), housing African and Asian elephants in three separate sections with four barns, enclosed by 20 miles (32 km) of fencing.

Since the founding of EAI, Buckley has spent months each year in Nepal, India, Thailand and Sri Lanka consulting on and providing elephant foot care, target training and Compassionate Elephant Management (CEM) for elephants and their mahouts, and, creating solar powered chain free corrals to get working elephants in Asia off chains.

With knowledge gained from finding, creating, building and directing The Elephant Sanctuary (Hohenwald), as well as the knowledge gained from work on 'Chain Free Means Pain Free' projects and other elephant welfare projects in Asia, Buckley created Elephant Refuge North America (ERNA) in 2016. The new Elephant Refuge in North America is located in Attapulgus, Georgia a few miles north of Tallahassee Florida. Buckley chose this site because it provides elephants 850 acres of species suitable habitat to wander and explore day and night, including pastures, forests, lakes, around 50 inches rainfall year-round, mild winters, hot humid summers. In addition the site will provide live web cams for people to observe natural elephant behaviour in real time, and an international intern/education center.

All content from Kiddle encyclopedia articles (including the article images and facts) can be freely used under Attribution-ShareAlike license, unless stated otherwise. Cite this article:
Carol Buckley Facts for Kids. Kiddle Encyclopedia.