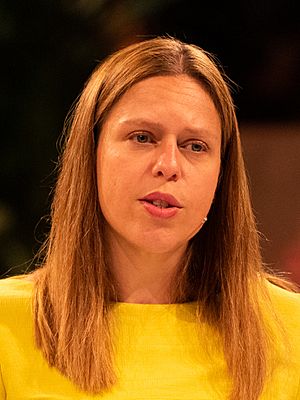 Cornelia Johanna "Carola" Schouten (born October 6, 1977 in 's-Hertogenbosch) is a Dutch politician of the ChristianUnion (ChristenUnie). She is the current Agriculture Minister and also a Deputy Prime Minister.

Schouten spent her youth on a farm in Giessen, a village in the Land of Heusden and Altena (a region in the very north of the Province of North Brabant).

She studied business administration at Erasmus University Rotterdam, and worked afterwards at the Social Affairs Ministry and as an assistant to the ChristianUnion parliamentary group.

In 2011 she was chosen into the Second Chamber. She participated in political negotiations in 2012 and in the government negotiations of 2017.

Since October 26, 2017 she has been Minister of Agriculture, Nature and Food Quality, and also third Deputy Prime Minister in the Third Rutte cabinet.

Carola Schouten is single with one child. She is a member of the Reformed Churches in the Netherlands (Liberated).

All content from Kiddle encyclopedia articles (including the article images and facts) can be freely used under Attribution-ShareAlike license, unless stated otherwise. Cite this article:
Carola Schouten Facts for Kids. Kiddle Encyclopedia.