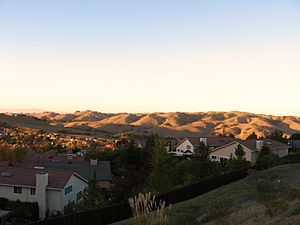 Carriage Hills, a residential subdivision and the neighborhood is an incorporated integral part of Richmond in the U.S. state of California.

It is located in the far eastern edge of the city, however due to the reputation of the city of Richmond, most residents claim residency in El Sobrante. This area is serviced by the El Sobrante post office (zip code 94803), this contributing to the dichotomy. It is a middle class area and features moderately packed cookie-cutter tract homes with modest yards.

The Carriage Hills area is on the margin of urban development spawl with a large expanse of undeveloped land, parks and open space immediately surrounding the area, including the Sobrante Ridge Preserve. People may enjoy rolling views of green or yellow grasses on bumpy hills depending on what time of year it is.

Visitors should also be aware that the only cell phone reception in the area is via AT&T or T-Mobile. 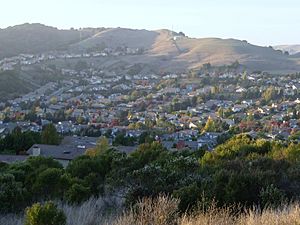 The neighborhood was formerly served by County Connection bus service, route 950 from Carriage Hills to Orinda BART Station, but this service was eliminated. It was replaced by AC Transit's route 74 23rd Street line, although this line does not directly service Carriage Hills, and requires a 1-mile (1.6 km) walk, it runs from the stop at Castro Ranch Road to the Richmond BART and Amtrak Station. Prior to October 2010, it also ran to the Orinda BART Station, but budget cuts eliminated this vital connection. The only remaining transit service is AC Transit school route 669 that connects those headed to DeAnza High School and Juan Crespí Middle School from the neighborhood once in the morning and twice in the afternoon, during the school year, in both directions.

All content from Kiddle encyclopedia articles (including the article images and facts) can be freely used under Attribution-ShareAlike license, unless stated otherwise. Cite this article:
Carriage Hills, Richmond, California Facts for Kids. Kiddle Encyclopedia.