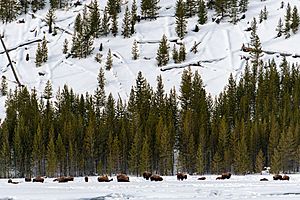 Bison grazing in winter in Yellowstone National Park in front of young forest recovering from 1988 fire.

In biology, the carrying capacity of an environment (area) is the maximum number of organisms of a particular species that can live there.

Resources (such as food and space) of each particular area are limited, and they limit the number of organisms that can live/survive there.

Forest fires, for example, negatively affect the carrying capacity of forest areas by destroying plants and trees which forest animals need to survive.

If too many organisms live in an environment, it is called overpopulation.

The term "carrying capacity" was originally used to determine the number of animals that could graze on a segment of land. This term is now used for humans too.

Some things that can change an environment's carrying capacity are pollution and the use of natural resources.

All content from Kiddle encyclopedia articles (including the article images and facts) can be freely used under Attribution-ShareAlike license, unless stated otherwise. Cite this article:
Carrying capacity Facts for Kids. Kiddle Encyclopedia.