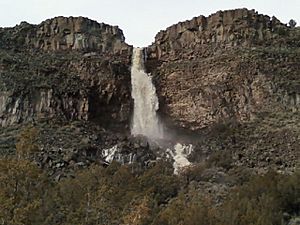 A seasonal wet-weather waterfall near Carson

Carson is an unincorporated community in southwestern Taos County, New Mexico, United States. Named after frontiersman and Taos resident Kit Carson, Carson was founded c. 1908, when the surrounding area was opened for homesteading. Carson is a low-density rural residential area.

In the 1930s, Carson was a struggling Mormon settlement. A local trader gave an old colcha, an embroidered woolen blanket, to his sister-in-law for repair. She studied the textile, and began making new colchas, starting a successful cottage industry. Most of the Carson colchas were made from recycled woolen fabrics. They were priced reasonably, and sold well. Many are now in museum collections.

All content from Kiddle encyclopedia articles (including the article images and facts) can be freely used under Attribution-ShareAlike license, unless stated otherwise. Cite this article:
Carson, New Mexico Facts for Kids. Kiddle Encyclopedia.