Carson Park is a baseball stadium located in Carson Park, a park in Eau Claire, Wisconsin. It was built as a Works Progress Administration project in 1936, and it is listed on the National Register of Historic Places. 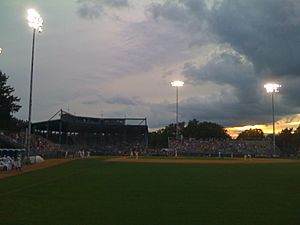 The land that became home to Carson Park, located on a peninsula surrounded by Half Moon Lake in Eau Claire, was donated in 1914 to the city of Eau Claire by an heir to William Carson. The following year, the park was opened. Construction of a sports complex, including a baseball stadium, football stadium and tennis courts, began in 1935 as a Works Progress Administration project. The first game was played in the stadium on May 4, 1937, in a Northern League game between the Eau Claire Bears and Superior Blues.

The stadium later was home to the Eau Claire Braves minor league baseball team. Among those who played for the Braves were Henry Aaron, Joe Torre, Bob Uecker, Andy Pafko and others who later played in Major League Baseball. Following the departure of the Braves in the 1960s, the Eau Claire Cavaliers amateur team began play in 1971. Under manager Harv Tomter, the team won 5 amateur baseball national championships.

A statue honoring Henry Aaron was erected in front of the stadium in 1994. A renovation project around 1997/98 added permanent seats behind home play, benches in the lower areas of the grandstand, and a remodeled concourse and exterior.

Upon the arrival of the Eau Claire Express Northwoods League franchise in 2005, the stadium underwent renovations for that season. A fan deck was added in the right field corner, a children's area was added along the 3rd-base foul line near the left field corner, and an electronic message board was added to the scoreboard. The field was re-leveled and re-sodded prior to the 2007 season. The press box was expanded with new sections along the first- and third-base sides for the 2009 season.

All content from Kiddle encyclopedia articles (including the article images and facts) can be freely used under Attribution-ShareAlike license, unless stated otherwise. Cite this article:
Carson Park (baseball stadium) Facts for Kids. Kiddle Encyclopedia.