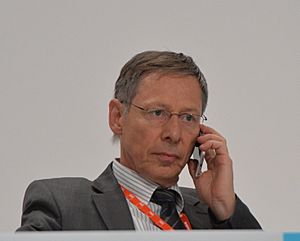 Carsten Günter Erich Sieling (born January 13, 1959 in Nienburg) is a German politician of the SPD. He is the current mayor of the city of Bremen and also head of the state of Bremen.

Previously he was among others a member of the Bundestag from 2009 to 2015.

Since July 15, 2015 he has been the President of the Senate and Mayor of the Free Hanseatic City of Bremen (head of government of the city-state of Bremen).

All content from Kiddle encyclopedia articles (including the article images and facts) can be freely used under Attribution-ShareAlike license, unless stated otherwise. Cite this article:
Carsten Sieling Facts for Kids. Kiddle Encyclopedia.