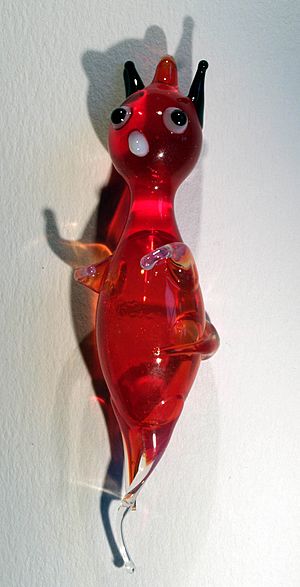 A Cartesian diver or Cartesian devil is a classic science experiment which demonstrates the principle of buoyancy (Archimedes' principle) and the ideal gas law. The first written description of this device is provided by Raffaello Magiotti, in his book Renitenza certissima dell'acqua alla compressione (Very firm resistance of water to compression) published in 1648. It is named after René Descartes as the toy it is said to have been invented by him.

The principle is used to make small toys often called "water dancers" or "water devils". The principle is the same, but the eyedropper is instead replaced with a decorative object with the same properties which is a tube of near-neutral buoyancy, for example, a blown-glass bubble. If the tail of the glass bubble is given a twist, the flow of the water into and out of the glass bubble creates spin. This causes the toy to spin as it sinks and rises. An example of such a toy is the red "devil" shown here. The device also has a practical use for measuring the pressure of a liquid.

Plastic divers were given away in american cereal boxes as a paid gifts in the 1950s, and "Diving Tony," a version of the toy modelled after Kellogg's Frosted Flakes mascot Tony the Tiger, was made available in the 1980s.

The experiment requires a large water-filled bottle, inside which is a "diver": a small, rigid tube, open at one end, very similar to an eyedropper with just enough air so that it is nearly neutrally buoyant, but still buoyant enough that it floats at the top while being almost completely submerged. Two alternative "divers" can be constructed. One sealed but a flexible bulb, and the other a sealed glass bulb (flashlight minus metal base) with wool threads trailing below. The flexible one will compress reducing volume, and the solid glass one will not change, but air bubbles will be trapped in the fibres, and be exposed to the pressure – thus will change volume.

There is just enough air in the diver to make it positively buoyant. Therefore, the diver floats at the water's surface. As a result of Pascal's law, squeezing the airtight container increases the pressure of the air, part of which pressure is exerted against the water that constitutes one "wall" of the airtight container. This water in turn exerts additional pressure on the air bubble inside the diver; because the air inside the diver is compressible but the water is an incompressible fluid, the air's volume is decreased but the water's volume does not expand, such that the pressure external to the diver a) forces the water already in the diver further inward and b) drives water from outside the diver into the diver. Once the air bubble becomes smaller and more water enters the diver, the diver displaces a weight of water that is less than its own weight, so it becomes negatively buoyant and sinks in accordance with Archimedes' principle. When the pressure on the container is released, the air expands again, increasing the weight of water displaced and the diver again becomes positively buoyant and floats.

It might be thought that if the weight of displaced water exactly matched the weight of the diver, it would neither rise nor sink, but float in the middle of the container; however, this does not occur in practice. Assuming such a state were to exist at some point, any departure of the diver from its current depth, however small, will alter the pressure exerted on the bubble in the diver due to the change in the weight of the water above it in the vessel. It is an unstable equilibrium. If the diver rises, by even the most minuscule amount, the pressure on the bubble will decrease, it will expand, it will displace more water, and the diver will become more positively buoyant, rising still more quickly. Conversely, should the diver drop by the smallest amount, the pressure will increase, the bubble contract, additional water enter, the diver will become less buoyant, and the rate of the drop will accelerate as the pressure from the water rises still further. This positive reinforcement will amplify any departure from equilibrium, even that due to random thermal fluctuations in the system. A range of constant applied pressures exists that will allow the diver either to float at the surface, or sink to the bottom, but to have it float within the body of the liquid for an extended period would require continuous manipulation of the applied pressure.

Divers inside an oval plastic bottle acquire new interesting properties. Indeed, an oval bottle can increase in volume when it is compressed, and if this happens, the drowned diver can ascend.

All content from Kiddle encyclopedia articles (including the article images and facts) can be freely used under Attribution-ShareAlike license, unless stated otherwise. Cite this article:
Cartesian diver Facts for Kids. Kiddle Encyclopedia.