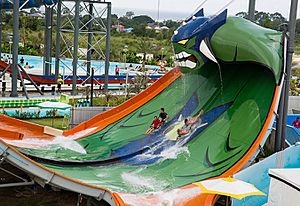 Cartoon Network Amazone waterpark is divided into 6 zones. There are 3 zones with water slides including Omniverse Zone, Adventure Zone and Cartoonival Zone, added up to 18 different slides. The other 3 zones without water slides are Mega Wave, Riptide Rapids and Surf Arena. All slides are supplied by Polin Waterparks.

The largest zone of the park, including 6 water slides inspired by characters from Ben 10. 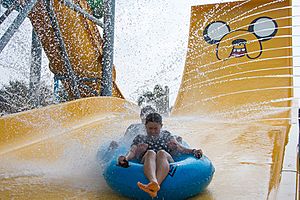 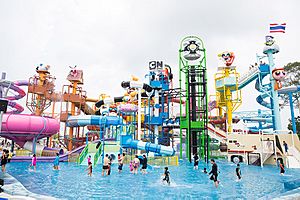 A zone for children featuring characters from The Powerpuff Girls, Ben 10, Chowder, The Amazing World of Gumball, Dexter's Laboratory etc. It includes 9 water slides and other 150 water features such as Disco Fountain Rain Fortress, two huge buckets of water from Four Arms and Omnitrix and many more. 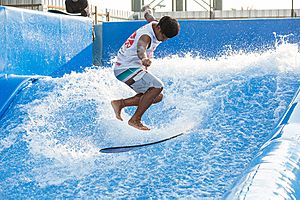 A 335-meter long river lying around Omniverse Zone and Adventure Zone surrounded by flowers and palm trees with a raft drifting along a stream.

Besides all the attractions in Cartoon Network Amazone waterpark, there are various live entertainment from costumed versions of characters from Cartoon Network's famous shows as well. 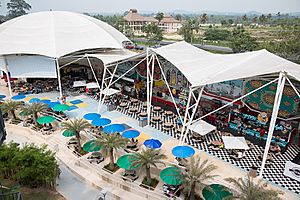 A waterpark's food center with a variety of food and beverage choices. 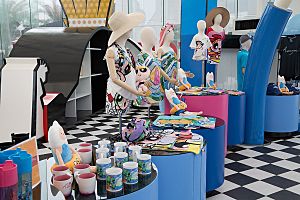 All content from Kiddle encyclopedia articles (including the article images and facts) can be freely used under Attribution-ShareAlike license, unless stated otherwise. Cite this article:
Cartoon Network Amazone Facts for Kids. Kiddle Encyclopedia.