Opus 1841 is presently composed of 33 speaking stops spread over three manuals and pedals. The 2,045 pipe organ is the largest such instrument on Cape Breton Island. Its facade, casing, pipes, swell and chorus boxes completely fill the apse of the theatre.

Opus 1841 was purchased for the new church, then under construction, in 1911 for $5,395. The original specification was for three manuals, 4 divisions, 29 stops, 27 registers, 29 ranks, 1843 pipes. A Stoplist for the 1911 instrument copied from the factory specifications for Casavant Opus 452 1911 3/29, courtesy of the Casavant Frères Archives, St. Hyacinthe, Québec, Canada is available by following this link: Original Stoplist

In 1962 further work was undertaken, the Clarion 4' replaced the Vox Humana, the Trompette 8' replaced the Cornopean, & the Hooded Harmonic Trumpet replaced an earlier Trumpet on the Great Organ, with tonal changes (new pipework supplied) made by Casavant via Ledoux & MacDonald Organ Service Co., Halifax. Wind is supplied by a 3 hp electric blower located in the basement directly below the organ.

The 18-ton organ underwent $15,000 in repairs to its bellows in 2008, with the sheep skin seams being replaced by rubberized bellows cloth. The repairs were undertaken by Maritime Pipe Organ Builders Ltd. of Moncton, New Brunswick. The tubular chimes in the Swell Organ, now disconnected, were donated in about 1929 by the Lady's Aid group of the Church. They were activated by an electro-pneumatic action and were dis-connected from the wind supply during repairs to the bellows.

In February 2017 Organ Tuner Jean-François Mailhot of Sydney Mines spent a week refurbishing Opus 1841, revoicing the reed stops (cleaning the reed tongues and shallots) of the swell organ: the 8' Trompette, the 8' Oboe, and the 4' Clarion, as well as the 16' Trombone of the Pedal Organ. At this time he also repaired a damaged facade pipe, part of the 8' Open Diapason stop of the Great Organ. 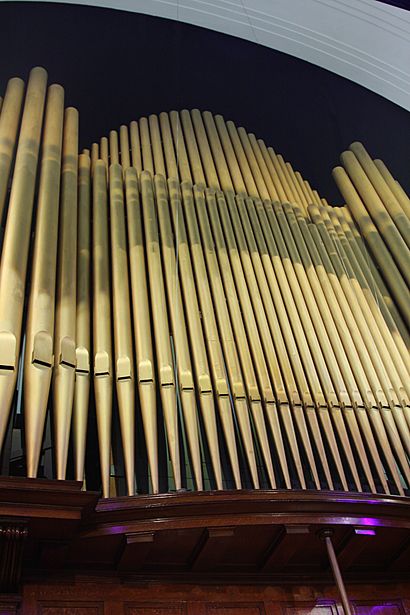 The Organ Façade, the rank of 61 pipes that make up the visible face of the organ upstage in the apse of the theatre. While a number of theses are dummy pipes solely for decoration, 29 are sounding pipes, making up part of two stops of the Great Organ, 12 as part of the Open Diapason 8' and 17 as part of the Violin Diapason 8'. 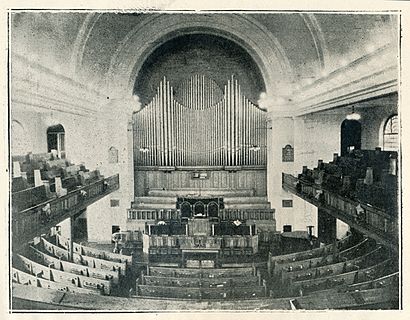 Other organists over the years were:

He was succeeded by: 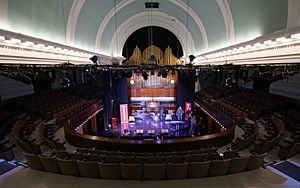 While still serving as a church, St. Andrew's was considered to be perhaps the finest concert venue in the city of Sydney. Before its rebirth as an arts centre, the building had a distinguished background as a performance space. St. Andrew's Choir presented many cantatas over the years and massed choirs from eight of Sydney's churches assembled in St. Andrew's to sing as individual choirs and as a group the new and old Christmas carols. Radio broadcasts of Classical musicians regularly held recitals and concerts there over the years because of the building's outstanding acoustical properties and its Casavant Freres organ. In the mid 1950s St. Andrew's was a regular stop for one of the incarnations of the Halifax Symphony Orchestra whose performances at St. Andrew's were broadcast regionally and even nationally by CBC Radio. Thomas Mayer was the conductor. He would often invite local performers to join them, at the time there were several operatic sopranos and mezzo-sopranos from Cape Breton who gained a national following because of these broadcasts. More recently, due to its seating capacity of over 1,000, and excellent acoustics it was sought after by organizations such as Celtic Colours, The Barra MacNeils, and the Cape Breton Chorale.