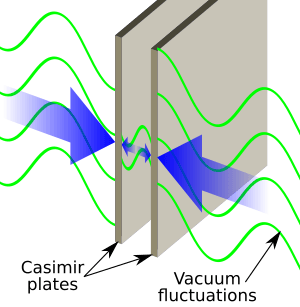 A visual representation of the Casimir effect.

The Casimir effect (predicted by Hendrik Casimir in 1948) is the attraction of two metal plates in a vacuum. This effect occurs because of a side effect of the quantum uncertainty principle, where 'virtual' particles cause the plates to be slightly pushed towards each other.

The quantum uncertainty principle says that particles, fields, etc. have two values, and that the more accurately you measure one, the less accurately you can measure the other. Since 'empty' space (which is a field) would be completely empty, then we would know both the field's magnitude (which is zero) and its rate of change (also zero). Therefore, there must be tiny fluctuations in 'empty' space, so that the uncertainty principle isn't violated. These take the form of virtual particles, which we wouldn't be able to detect directly. However, we can see the effects they have on real particles. Some of these particles are virtual photons, which can also be considered as waves. Now, between the reflective metal plates, there is a certain distance. Certain virtual photons, specifically ones where the distance divided by the wavelength is a whole number, are the only ones that can fit in here; if it isn't a whole number, eventually the peaks and troughs of the waves will coincide, and cancel it out.

All content from Kiddle encyclopedia articles (including the article images and facts) can be freely used under Attribution-ShareAlike license, unless stated otherwise. Cite this article:
Casimir effect Facts for Kids. Kiddle Encyclopedia.