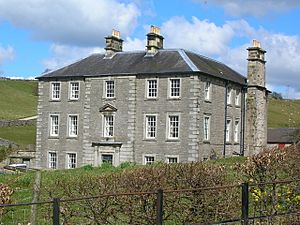 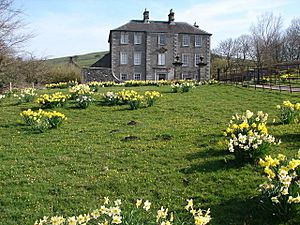 Castern Hall, also known as Casterne Hall, is a privately owned 18th-century country house in the Manifold Valley, near Ilam, Staffordshire, England. It is the home of the Hurt family, who have owned the land since the mid-16th century.

The grange at Castern was owned by Burton Abbey until the Dissolution of the Monasteries. It was acquired by Roger Hurt, youngest son of Nicholas Hurt of Ashbourne, who settled there in the mid-16th century. Later, Nicholas Hurt (1649-1711) married the heiress of Alderwasley and in time Alderwasley Hall became the family's principal residence.

The Castern house was remodeled in about 1740 by Nicholas Hurt, who became High Sheriff of Derbyshire in 1756. The present three-story, five-bayed entrance front in the Georgian style dates from this period.

In the 18th and 19th centuries, the house was often rented out to tenants. The Alderwasley estate was sold in the 1930s and Castern became the family's principal residence once again.

The house was substantially featured in Agatha Christie's Poirot in the episode "The Mystery of Hunter's Lodge". Other movies and series that have been shot there were Jane Eyre (1983), Sherlock Holmes: The Hound of the Baskervilles (1988), Far from the Madding Crowd (1997) and Jonathan Creek: Frog Hollow. (1999)

All content from Kiddle encyclopedia articles (including the article images and facts) can be freely used under Attribution-ShareAlike license, unless stated otherwise. Cite this article:
Castern Hall Facts for Kids. Kiddle Encyclopedia.