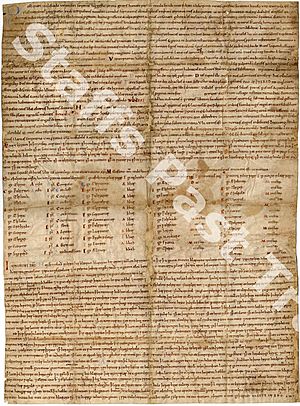 Charter of Æthelred the Unready to Burton Abbey, confirmation of the will of Wulfric Spot, AD 1004

Burton Abbey at Burton upon Trent in Staffordshire, England, was founded in the 7th or 9th century by St Modwen or Modwenna. It was refounded in 1003 as a Benedictine abbey by the thegn Wulfric Spott. He was known to have been buried in the abbey cloister in 1010, alongside the grave of his wife.

Burton Abbey was mentioned in the Domesday book when it was said to control lands in Mickleover, Appleby Magna in Leicestershire, Winshill and Stapenhill in Staffordshire, Coton in the Elms, Caldwell and Ticknall. The abbey itself was neither large nor wealthy and in 1310 was claimed to be the smallest and poorest Benedictine monastery in England by the monks. It suffered frequent financial troubles throughout its existence, often due to mismanagement and outright criminal behaviour, though the situation seems to have been resolved by the 16th century.

In the 13th to 14th centuries there were around thirty monks in residence though this had fallen off to almost half the number by the 1520s.

However, by contradiction, the monastery was nevertheless the most important in Staffordshire and by the 1530s had the highest revenue. The abbot was both a secular lord and, "exercised an independent spiritual jurisdiction. He was a figure of some standing, regularly serving on papal and royal commissions and acting as a collector of clerical taxes within the diocese." At various times between 1295 and 1322, the abbot was summoned to attend the Parliament of England, and again in 1532. It is also known that there were frequent Royal visits to the abbey, including those by William I, Henry II and Edward I.

The Abbey's annals are an important source for thirteenth century political history, and the Abbey's major intellectual achievement. 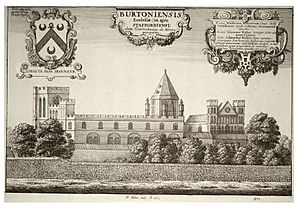 The abbey was dissolved in 1539, to be refounded in 1541 as a college for a dean (who had been the last abbot) and four prebendaries. It was again dissolved in 1545 and granted to Sir William Paget.

Parts of the abbey church were retained for parish use, however these were demolished and replaced by a new church, St Modwen's in 1719-28. Some fragments remain of the chapter house nearby but little of the rest remains either.

Two buildings were converted to residential use - a part known as the Manor House, and the former infirmary. The infirmary became known as The Abbey, and is now an Inn.

In around 1712 George Hayne opened the River Trent Navigation and leased the grounds of Burton Abbey to construct a wharf and other buildings in the precinct. This led to the development of Burton as the major town for brewing and exporting beer.

In 1967, contractors working on extensions to Burton Technical College uncovered two underground vaults which were thought to have been used as wine cellars. The larger of the two chambers was later used to house a student union disco aptly named The Vault

All content from Kiddle encyclopedia articles (including the article images and facts) can be freely used under Attribution-ShareAlike license, unless stated otherwise. Cite this article:
Burton Abbey Facts for Kids. Kiddle Encyclopedia.