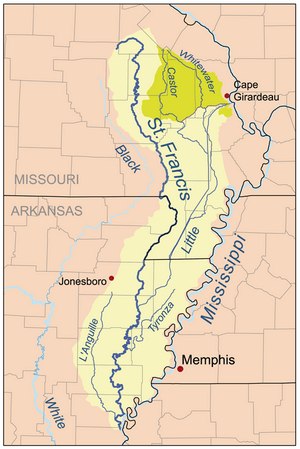 The Upper Castor rises in the southern corner of Ste. Genevieve County of southeast Missouri about ten miles north-northeast of Fredericktown. The river flows south through eastern Madison County into the eastern edge of Wayne County to Bollinger County where it empties into the Headwater Diversion Channel, which flows into the Mississippi River just south of Cape Girardeau.

The Lower Castor River south of the Diversion Channel flows south where it joins the Little River.

Castor is a name derived from French meaning "beaver". The stream was mentioned by Henry Schoolcraft in his 1818 report on his exploration of southern Missouri.

All content from Kiddle encyclopedia articles (including the article images and facts) can be freely used under Attribution-ShareAlike license, unless stated otherwise. Cite this article:
Castor River (Missouri) Facts for Kids. Kiddle Encyclopedia.