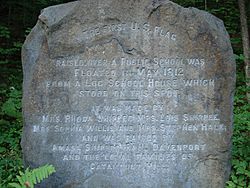 Catamount is a former village of Colrain, Massachusetts. In 1812, the schoolhouse that once stood in Catamount was the first schoolhouse to fly the United States Flag.

Due in part to the remote, mountainous location, Catamount was abandoned in the early 20th century. Much of the land was acquired by the Commonwealth of Massachusetts in 1967, leading to the creation of the Catamount State Forest.

Catamount is currently accessible to hikers and snowmobilers. McLeod Pond is a popular destination for local fishers and canoers. Catamount State Forest is managed by the Mohawk Trail State Forest.

All content from Kiddle encyclopedia articles (including the article images and facts) can be freely used under Attribution-ShareAlike license, unless stated otherwise. Cite this article:
Catamount, Massachusetts Facts for Kids. Kiddle Encyclopedia.