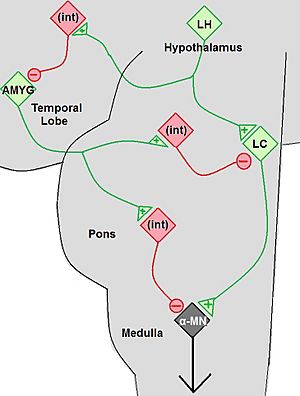 In this simplified brain circuit, damage to orexin-secreting neurons in the hypothalamus can lead to inhibition of motor neurons, thus lowering muscle tone.

Cataplexy is a medical condition where people become limp when they are exposed to spontaneous emotions such as laughter, fright, anger, or sadness. People who have cataplexy will sometimes see that some of their muscles suddenly fail them. Cataplexy often affects people who have narcolepsy. Narcolepsy is a sleep disorder. People with narcolepsy tend to suddenly fall asleep. They cannot control when they fall asleep. Cataplexy is sometimes confused with epilepsy, where a series of flashes or other stimuli cause superficially similar seizures.

Cataplexy is a sudden and transient episode of muscle weakness accompanied by full conscious awareness, and is caused by an autoimmune destruction of the neurotransmitter hypocretin (also called orexin), which regulates arousal and wakefulness. Cataplexy without narcolepsy is rare and the cause is unknown.

The term Cataplexy originates from the Greek kata, meaning down, and plexis, meaning a stroke or seizure.

Cataplexy manifests itself as muscular weakness which may range from a barely perceptible slackening of the facial muscles to complete muscle paralysis with postural collapse. Attacks are brief, most lasting from a few seconds to a couple of minutes, and typically involve dropping of the jaw, neck weakness, and/or buckling of the knees. Even in a full-blown collapse, people are usually able to avoid injury because they learn to notice the feeling of the cataplectic attack approaching and the fall is usually slow and progressive. Speech may be slurred and vision may be impaired (double vision, inability to focus), but hearing and awareness remain normal.

Cataplexy attacks are self-limiting and resolve without the need for medical intervention. If the person is reclining comfortably, he or she may transition into sleepiness, hypnagogic hallucinations, or a sleep-onset REM period. While cataplexy worsens with fatigue, it is different from narcoleptic sleep attacks and is usually, but not always, triggered by strong emotional reactions such as laughter, anger, surprise, awe, and embarrassment, or by sudden physical effort, especially if the person is caught off guard. One well known example of this was the reaction of 1968 Olympic long jump medalist Bob Beamon on understanding that he had broken the previous world record by over 0.5 meters (2 feet). Cataplectic attacks may also occur spontaneously with no identifiable emotional trigger.

The diagnosis of narcolepsy and cataplexy is usually made by symptom presentation. Presenting with the tetrad of symptoms (Excessive daytime sleepiness, sleep onset paralysis, hypnogogic hallucinations, cataplexy symptoms) is strong evidence of the diagnosis of narcolepsy. A Multiple Sleep Latency Test (MSLT) is often conducted in order to quantify daytime sleepiness.

Cataplexy is treated with medications. There are no behavioral treatments. People with narcolepsy will often try to avoid thoughts and situations that they know are likely to evoke strong emotions because they know that these emotions are likely to trigger cataplectic attacks.

All content from Kiddle encyclopedia articles (including the article images and facts) can be freely used under Attribution-ShareAlike license, unless stated otherwise. Cite this article:
Cataplexy Facts for Kids. Kiddle Encyclopedia.