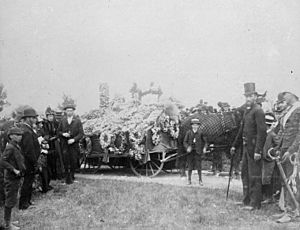 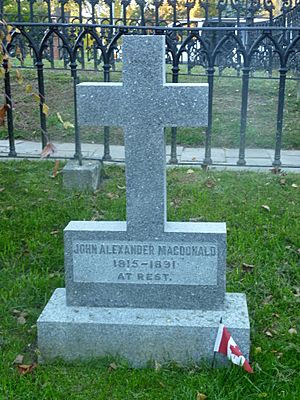 Cataraqui Cemetery is a cemetery located in Kingston, Ontario, Canada. Founded in 1850, it predates Canadian Confederation, and continues as an active burial ground. The cemetery is 91 acres in a rural setting with rolling wooded terrain, ponds and watercourses. More than 46,000 individuals are interred within the grounds, and it is the final resting place of many prominent Canadians, including the burial site of Canada's first prime minister, Sir John A. Macdonald. The Macdonald family gravesite, and the cemetery itself, are both designated as National Historic Sites of Canada.

Cataraqui Cemetery is the final resting place for many notable persons including politicians, businessmen, humanitarians, and authors. The cemetery contains the war graves of 61 service personnel from World War I, and 84 from World War II. Queen's University owns a section that is reserved for interring the remains of those who dedicate their bodies to education and research.

All content from Kiddle encyclopedia articles (including the article images and facts) can be freely used under Attribution-ShareAlike license, unless stated otherwise. Cite this article:
Cataraqui Cemetery Facts for Kids. Kiddle Encyclopedia.