Cathcart Castle was a 15th-century castle, located in what is now Linn Park in the Cathcart area of southern Glasgow, Scotland. The castle was abandoned in the 18th century, and the remaining ruins were pulled down in 1980, leaving only foundations visible. 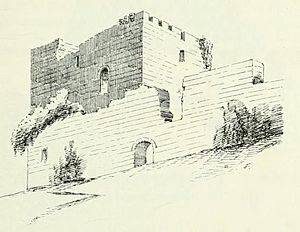 Cathcart Castle from the south-east circa. 1887 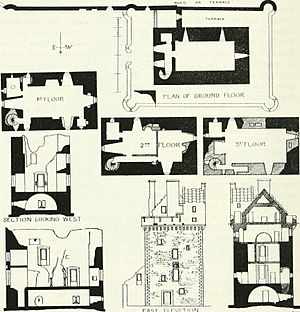 A plan of the castle published in 1887 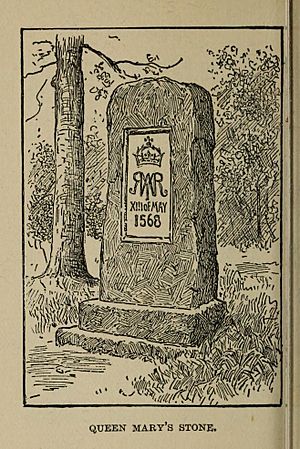 The lands of Cathcart were held by the family of that name from the 12th century. In the mid-15th century the head of the family was raised to the peerage as Lord Cathcart, and it is believed that the castle was built at around this time. In 1546 the castle passed to the Semple family. It is highly unlikely that Mary, Queen of Scots, would have spent the night before the Battle of Langside (1568) at Cathcart Castle or have watched the battle from a nearby hill called the Court Knowe. The Semples were supporters of Mary's enemies and would have captured her and put an end to her plans before the battle had started. Court Knowe is some 60m below the height of Langside village, where the battle took place, meaning Mary would not have been able to see what took place. A more likely site would have been Prospecthill, which lies on the line of her army's approach to Langside.

An alternative version of the story has the Queen living with her kinsfolk, the Stuarts of Castlemilk, whose defensive stronghold at the foot of the Cathkin Braes contained a chamber later known as Queen Mary's Room, where Her Majesty supposedly lodged on the night before the Battle of Langside. The ceiling of this room was ornamented with the Arms of the Stuart monarchs of Scotland. This is unlikely either, as Mary spent the preceding week at Hamilton, where 6000 troops gathered.

In 1740 the Semples built Cathcart House, also since demolished, nearby, and moved out of the castle, leaving it to ruin. The newly created 1st Earl Cathcart bought back his ancestral home in 1814, although with the intention of selling off the stone rather than living in it. In 1866 the castle was still standing to five storeys, and was surrounded by outbuildings. The lands around the castle were purchased by Glasgow City Council in 1927, and added to Linn Park. In 1980 the remaining ruins were pronounced dangerous, and were pulled down by the council. The site is now a Scheduled Monument.

The castle was built on the rocky north-east bank of the White Cart Water. It comprised a rectangular tower house, 15.5 by 9 m (51 by 30 ft), of five storeys including a vaulted basement. This was supplemented by a curtain wall, enclosing a small barmkin approximately 22 by 15 m (72 by 49 ft), with the tower at the centre. The curtain wall had round corner towers, and a twin-towered gatehouse to the east. The foundations of the tower house remain to around 1 m (3 ft) high. Earthworks to the west of the castle have been interpreted as the remains of an outer bailey or ringwork.

All content from Kiddle encyclopedia articles (including the article images and facts) can be freely used under Attribution-ShareAlike license, unless stated otherwise. Cite this article:
Cathcart Castle Facts for Kids. Kiddle Encyclopedia.