Cathedral of Our Lady of Guadalupe (Dodge City, Kansas) facts for kids

The Cathedral of Our Lady of Guadalupe is a Catholic cathedral and parish church in Dodge City, Kansas, United States. It is the seat of the Diocese of Dodge City. 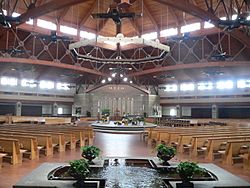 The cathedral itself is an octagon shaped structure clad in Silverdale limestone that was mined near Arkansas City, Kansas. The bell tower is 77 feet (23 m) tall and is separate from the building. The building is accessed through a plaza that fronts the cathedral. In the center of the plaza is a fire pit used at the Easter Vigil. The worship space itself is accessed through a gathering space. Also off the gathering space is Sacred Heart Chapel, which is named for the former cathedral, and the shrine of Our Lady of Guadalupe. The image of the Virgin Mary in the shrine was given by the Rev. Jose Betancourt, who was the pastor of Christ the King Church in Silao, Mexico when Our Lady of Guadalupe Church in Dodge City was dedicated on April 19, 1950. It was created by Tobias Villaneuvo of Leon, Mexico.

The pews in the cathedral are made of white oak and provide seating for 1,430. The altar and the ambo are both created from granite. Soil from all the parish churches in the diocese was brought to the groundbreaking for the cathedral in 2000 and the altar was built over the soil. The cathedra and the processional cross are both carved from Cuban mahogany. The cathedra is also composed of a contrasting wood from Mexico named zircote. The tabernacle is made of polished bronze and Cuban mahogany. Its design is based on Spanish and Moorish influences. It sits on a granite pedestal that connects it to the granite altar. Colorado artist Hubero Maestas created the stations of the cross and the main crucifix. An ambulatory circles the perimeter of the worship space. It includes six shrines for people's devotion.

All content from Kiddle encyclopedia articles (including the article images and facts) can be freely used under Attribution-ShareAlike license, unless stated otherwise. Cite this article:
Cathedral of Our Lady of Guadalupe (Dodge City, Kansas) Facts for Kids. Kiddle Encyclopedia.