Cathedral of the Most Holy Trinity, Bermuda facts for kids 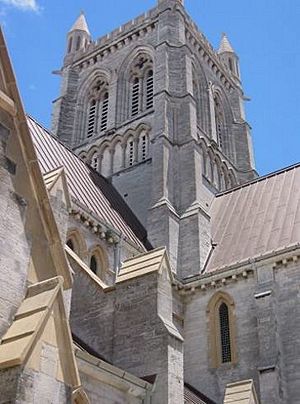 The Cathedral of the Most Holy Trinity (often referred to as the Bermuda Cathedral) is an Anglican (the state church, the Church of England; which in Bermuda was renamed the Anglican Church of Bermuda in 1978, an extra-provincial diocese under the Archbishop of Canterbury)) cathedral located on Church Street in the City of Hamilton, in Pembroke Parish, in the British Overseas Territory of Bermuda.

The original Trinity Church was designed in the Early English style by James Cranston of Oxford in 1844 and was completed in 1869. Named Trinity Church, it was designated a chapel of ease for the then-Bishop of Newfoundland and Bermuda, whose Cathedral (the Cathedral of St. John the Baptist), was at St. John's, Newfoundland). In Bermuda, St. John's Church was already the parish church for Pembroke Parish, and remained so after Trinity Church was constructed. Trinity Church was destroyed by arson in 1884. Scottish architect William Hay, who had been consulted on the construction of the first building in 1848-1849 and again in 1862, was hired to design the current structure in 1885 in the Gothic Revival style. While Hay designed most of the structure, his partner George Henderson designed the eastern portion of the cathedral.

In an unhappy co-incidence, in 1892 the Cathedral of St. John the Baptist in Newfoundland was destroyed, with much of the city of St. John's, in the Great Fire of 1892. It was reconstructed, and also completed in 1905.

It is one of two cathedrals in Bermuda, the other being the Roman Catholic St. Theresa's, also in Hamilton. Composer S. Drummond Wolff was organist at the cathedral from 1959–1962. For a small fee, visitors to the cathedral can climb the tower for a view of Hamilton and its harbour.

All content from Kiddle encyclopedia articles (including the article images and facts) can be freely used under Attribution-ShareAlike license, unless stated otherwise. Cite this article:
Cathedral of the Most Holy Trinity, Bermuda Facts for Kids. Kiddle Encyclopedia.