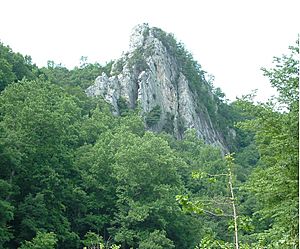 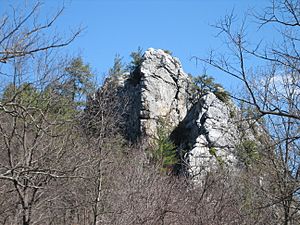 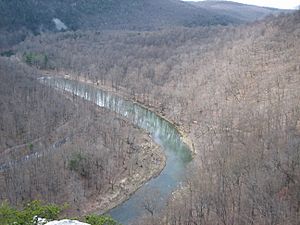 Caudy's Castle is a rock pinnacle of Ridgeley (Oriskany) sandstone that stands 1,070 feet (326 m) above sea level over the Cacapon River near the Bloomery Pike (West Virginia Route 127) south of Forks of Cacapon in Hampshire County, West Virginia. The rock formation is named after James Caudy, an early Hampshire County pioneer and settler who fought off an attack by fifteen Native Americans from the rock during the French and Indian War. Caudy's Castle is also known as the Castle Rock. The pillar lies on the southern end of its namesake, Castle Mountain.

All content from Kiddle encyclopedia articles (including the article images and facts) can be freely used under Attribution-ShareAlike license, unless stated otherwise. Cite this article:
Caudy's Castle Facts for Kids. Kiddle Encyclopedia.